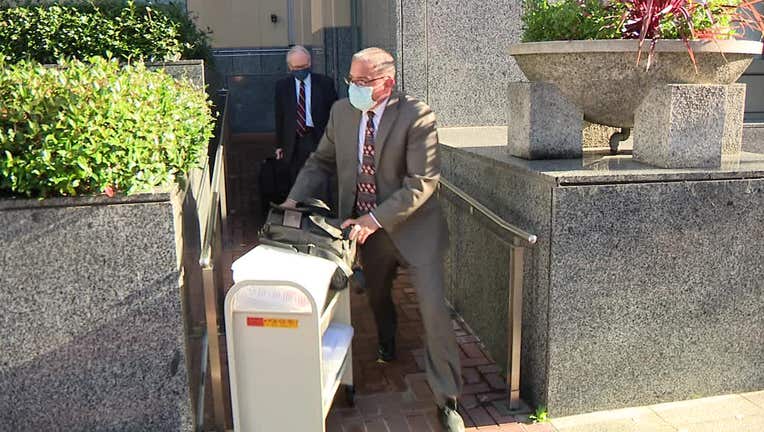 Former FCI Dublin warden Ray J. Garcia wheels out a caseload of files after taking the stand in his sex abuse trial in federal court in Oakland. Dec. 2, 2022

OAKLAND, Calif. - The former warden of FCI Dublin testified Monday that he made a mistake when he engaged in multiple naked video chats with a woman who was in the custody of the U.S. Bureau of Prisons while she was in a halfway house in Alaska.

"I was clearly out of pocket and out of bureau policy," Ray J. Garcia told the jury during the sixth full day of trial in Oakland where he faces eight counts of sexual abuse and one count of lying to the FBI. "We are not supposed to have contact with former inmates for two years….I made a mistake. I owned up to it by retiring."

But he didn't retire. Not immediately, at least.

In fact, he was promoted to warden. And he ended up retiring a full year after the video chats in October 2021, notably month after being arrested on sex abuse charges.

"You owned up to it because you were caught," Asst. U.S. Attorney Mollie Preideman said during her cross-examination –  to which Garcia didn't reply.

Taking the stand for his third consecutive day, Garcia steadfastly maintained that he never digitally penetrated any incarcerated women, never showed any woman in prison his penis and never had any sexual relationship with any incarcerated woman between 2019 and 2021 – the years for which he is charged.

Garcia is one of five correctional officers to be charged with sex crimes at the all-women's prison and the highest ranking federal prison official to be arrested on suspicion of these crimes. He is the first of the five to go to trial.

All sexual activity between a prison worker and incarcerated people is illegal. Correctional employees enjoy power over those behind bars, controlling every aspect of their lives from mealtime to lights out, and there is no scenario in which an incarcerated person can give consent.

But under cross-examination, Garcia testified he made other mistakes, too.

He acknowledged that not only did he have video sex with the woman named Rachel in the halfway house in October 2020, he also never reported any of her so-called drug information she wanted to pass along about FCI Dublin to his investigative unit – which is why he testified he communicated with her in the first place.

He later acknowledged he should have documented this information.

"I probably made a judgmental error," Garcia testified. "I chose to investigate it myself."

Garcia said he gave Rachel a "burner" email and a burner phone to talk, just for this reason. But then he admitted under cross-examination that he never filed an incident report or wrote a memo to document this drug tip. He did admit that he was aroused during these sessions, in which he "most likely" masturbated as well.

The reason he had taken her photos during these sessions and kept them, he said, was because Rachel "suggested I record her so I could look at her at night when it was convenient for me."

But Priedeman didn't let that go.

"But you are present in these videos," she told Garcia. "Why would you need to watch her late at night?"

Last week, Rachel testified that she and Garcia had phone sex when she was in a halfway house – a relationship that started at FCI Dublin when she was incarcerated there and the two bonded over their sons, both of whom have special needs.

She was hostile toward Garcia during her testimony, telling the jury that while she agreed to undress for Garcia over the phone, he took her photos and recorded her without consent. She testified their relationship began in prison – which Garcia categorically denied.

Rachel also added that she was testifying for the prosecution under duress, as retaliation for reporting abuse has severe ramifications.

Garcia acknowledged mistakes he made with at least one other incarcerated woman, as well – namely, the prosecution's star witness.

He testified last week that he took two photos of a woman named Melissa naked on her hands and knees on a friend's bed to document – mistakenly – what he thought was her chopping up drugs.

He testified that he quickly learned however, that there was no contraband issue. But he said he took her picture – twice – to document that she was naked during the day, which is considered a "moderate" violation. He planned to write up an incident report at home, he said, which is why her photos were found on his personal laptop.

But he never wrote her up. And he never submitted that report.

Under cross-examination, Garcia admitted he violated BOP policy by shredding Melissa's incident report with her two naked photos, because it was supposed to be preserved as evidence just in case.

Garcia said he decided not to report Melissa to cultivate her as a source to glean drug information at the prison – another violation of chain of command, he acknowledged.

But he also said that in his opinion, the Special Investigative Services, or SIS, who are similar to Internal Affairs investigators, were "ineffective" and "delinquent" in their investigations and he thought he would help them by working his own confidential informants.

Putnam told the jury there is no circumstance whatsoever that a warden or officer should have taken a naked photograph of a woman to document she wasn't clothed during the day.

Putnam also said that it's completely out of bounds for wardens to write up incident reports or investigate alleged inmate behavior – that's the job of SIS.

And he testified that Garcia never told him about a confidential informant situation that he should look into.

Putnam was Garcia's "best friend," many women testified last week during trial, and the reason Garcia boasted his alleged behavior would never be investigated.

Not only did Putnam deal a stunning blow to Garcia's testimony, but the ex-warden's explanations were also in direct contrast to what Melissa testified to last week.

Melissa testified  that Garcia complimented her, flattered her, and then got pornographic with her, instructing her to get "on all fours" in a friend's room and insert a half-eaten candy cane into her vagina and take her pictures.

It stung, she said, but she did it to please Garcia, who made her feel special. She also testified Garcia later walked by her sucking the candy, telling her, "You taste so good."

Then there is the issue of how and why Garcia had photos of his penis on his prison-issued cell phone.

In opening statements, prosecutors intimated that there were "hundreds" of Garcia's those images on that phone.

But because of U.S. District Court Judge Yvonne Gonzales Rogers' ruling, only two of those photos came up in court on Monday.

Garcia acknowledged that he had taken those two photos of his penis in the warden's complex during his regular work shift because he was single at the time and often had "cyber sex" with people he was dating. He testified he deleted those photos within 24 hours.

"I may have, yes," Garcia told Priedeman when she asked him if he took the photos.

"You took a lot," Priedeman stated.

"I wouldn't say a lot," he countered.

Then the issue of just how many photographs was dropped.

But Garcia was adamant that he never showed any incarcerated woman his penis – despite multiple women testifying that he did.

He said if they saw his any such photograph, perhaps Melissa was "stalking" him and peeked at his phone in his "ignorance," and then told all the other women in some sort of "conspiracy."

"I never showed my genitalia to any inmate," Garcia said. "Never."