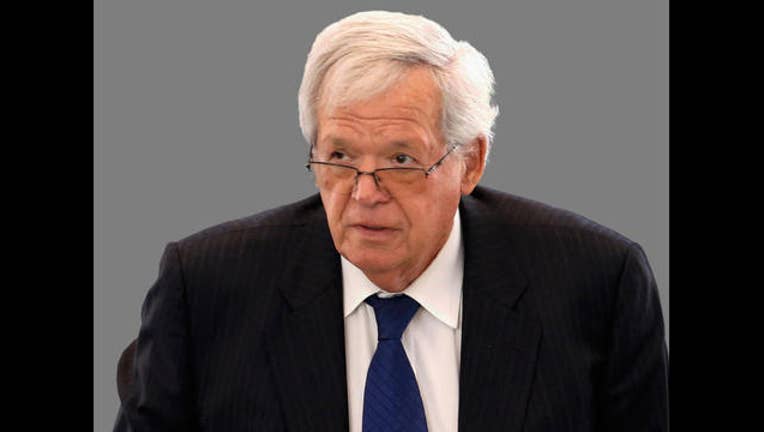 CHICAGO (AP) -- Former U.S. House Speaker Dennis Hastert wheeled himself into a federal prison in Minnesota on Wednesday to serve his 15-month sentence in a hush-money case involving revelations that he sexually abused at least four boys while a high school wrestling coach in Illinois.

The 74-year-old Republican -- one of the highest-ranking U.S. politicians to ever go to prison -- arrived around noon at the facility in Rochester where he will be known as Inmate No. 47991-424.

Hastert, who began using a wheelchair after falling ill last year, wore a black shirt and camouflage pants as he wheeled himself into the complex between razor-wire fencing. The only person accompanying him was a woman, who followed him carrying crutches, a plastic bag and a small brown box.

Jolene Burdge, the sister of one Hastert victim, said in a phone interview later Wednesday that she never fully believed until Hastert went in that someone as powerful as him would end up behind bars for what he did.

When sentenced in April in Chicago, Hastert was branded "a serial child molester" by U.S. District Judge Thomas M. Durkin -- and Burdge also spoke. Turning to Hastert in court, she described how she was among the first to broach his abuse of kids, telling him, "I hope I have been your worst nightmare."

Her brother, Stephen Reinboldt, died of AIDS in 1995. But she said on Wednesday that Hastert's imprisonment brings her some closure.

"This whole ordeal is sad," Burdge said. "But when you abuse children, you need to suffer the consequences -- no matter who are."

Hastert was never charged with child abuse because the statutes of limitation blocked prosecutors from filing charges dating back to when Hastert coached at Yorkville High School, from 1965 to 1981. Instead, Hastert was charged with violating banking laws for trying to pay $3.5 million in hush money to one victim referred to in court papers only as "Individual A."

One former wrestler testified during Hastert's sentencing, saying he was abused when he was in the school locker room.

"I looked up to coach Hastert," said 53-year-old Scott Cross, who also is the brother of a state Republican leader. "I was devastated. I felt very alone."

The Illinois congressman-turned-high-paid lobbyist must serve at least 85 percent of his sentence, or just over a year.

The nation's longest-serving GOP House speaker -- who for eight years was second in the line to the presidency -- was subject to the same protocol as other new inmates, which typically includes a full-body strip search. Inmates also trade their street clothes for prison garb.

Unlike other prison-bound Illinois politicians, Hastert didn't speak to the media before going in. By contrast, imprisoned ex-Gov. Rod Blagojevich chatted with reporters and posed for cameras in the hours before entering a prison in Colorado in 2012 to serve a 14-year sentence for multiple corruption convictions.

Hastert will serve his term at the 64-acre Rochester Federal Medical Center, a prison that specializes in care for physically ailing or mentally ill inmates and is near the Mayo Clinic. Hastert nearly died from a blood infection and suffered a stroke after he pleaded guilty on Oct. 28. He also has diabetes.

The facility, despite its name, is a prison. It holds just less than 700 inmates from all security classifications. Among them is Jared Lee Loughner, who is serving a life term for killing six people in the 2011 shooting that targeted and injured former U.S. Rep. Gabby Giffords of Arizona.

A quarter of the prison's inmates have been convicted of sex-related crimes, according to the Bureau of Prisons. Durkin, the judge in Hastert's case, said the prison's large population of child molesters should reduce chances that Hastert would be singled out for attacks in a prison culture in which those who hurt children are considered the lowest of the low.

The same prison has held other disgraced politicians, including Dan Rostenkowski, a Democrat and a powerful U.S. House member from Illinois who pleaded guilty to mail fraud in the 1990s. He died in 2010.

Hastert sat in a wheelchair during sentencing and used a walker to deliver a statement. Durkin said the prison would have the facilities to treat Hastert, noting, "This is not meant to be a death sentence."

Hastert's life will now be highly regimented, from frequent head counts to shakedown searches. Physically able inmates must work from 7:40 a.m. to 3:30 p.m. Jobs include mopping floors for as little as 25 cents an hour.

Prosecutors described Hastert's payments as something akin to an out-of-court settlement, saying "Individual A" wanted to bring in lawyers and put the agreement in writing -- but that Hastert refused.

Court filings detailed the abuse allegations, describing how Hastert would also sit in a recliner in the locker room with a direct view of the showers.