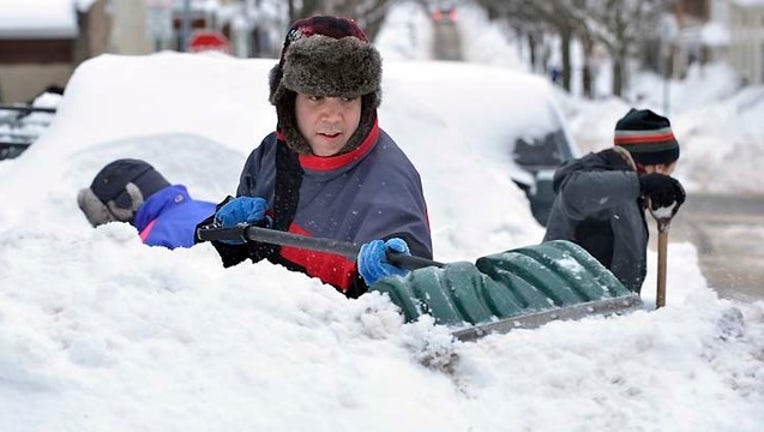 BOSTON (AP) — Exasperated New Englanders still digging out from three major storms that left 6 feet of snow in many areas are bracing for what's expected to be another punishing winter blast.

The National Weather Service has issued a blizzard watch from Cape Cod to coastal Maine beginning Saturday evening. The storm could bring a foot or more of snow to some areas, with winds gusting to 70 mph and the potential for coastal flooding.

"Snow amounts will not be as much as the previous big storms, but still, when you have 8 to 14 inches of snow, wind driven-snow, the cold air and the snow that is already there it's probably going to be very difficult for a lot of people," he said.

If there was a silver lining, Simpson said the track of the storm is likely to stay far enough off shore to avoid crippling impacts and reduce the amount of snowfall inland. It will also hit over a holiday weekend, which could minimize the effect on travel, though it could disrupt some Valentine's Day plans, with the storm expected to begin Saturday afternoon before intensifying overnight into Sunday.

A spokesman for the Massachusetts Bay Transportation Authority said no decision had been made on whether to suspend service on the Boston-area transit system during the storm, as it has been forced to do during previous storms.

On Thursday, Boston Mayor Martin Walsh suggested that the MBTA should shut down over the weekend, but he reversed course Friday and said closing the system would "pose an incredible hardship to workers and people living throughout Boston."

In Massachusetts, National Guard troops have been called up to assist with snow removal, and the Hanscom Air Force base outside Boston has become a staging area for heavy equipment coming from neighboring states to help in the effort. Walsh said two machines capable of melting 135 tons of snow per hour arrived from New York City on Thursday, along with backhoes, dump trucks and front-end loaders from others states.

With schools on vacation next week, some families been leaving Boston's Logan International Airport early to beat the storm.