Sergeant cranks up the heat to end standoff at Oakland airport

An Alameda County sheriff’s sergeant came up with an unusual idea to deescalate a tense standoff at Oakland International Airport.

In that quarter century of work, he's had to adapt to the unique aspects of each standoff. On Tuesday, he improvised and found a simple tool to distract an erratic and armed person. He turned off the air conditioning.

And this sergeant's de-escalation tactics -- where he used creative techniques instead of drawing his gun -- comes at a time when there are nationwide calls for police reforms and better ways to handle mental health crisis situations, which constitute the vast majority of calls for help. 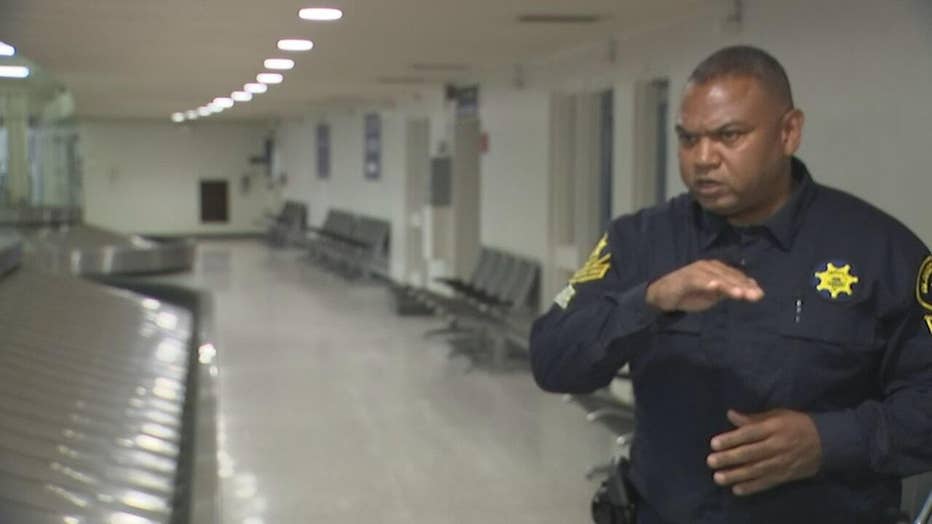 Yes, Hazelitt said he was scared and worried about his partners. But that's not what was most crucial to him.

"I definitely feared for my life," Hazelitt said. "But more importantly, I feared for his life."

Hazelitt was facing a tough scenario: A Black man in his 30s had been running between terminals at Oakland International Airport threatening to kill himself with a knife at 6 a.m., as early-morning travelers rushed to and from flights. The man was acting bizarrely, Hazelitt explained, and ended up barricading himself in the baggage carousel area of Terminal 1.

When Hazelitt arrived, the man was holding a 7-inch knife to his neck and begging deputies to shoot him.

"I didn't want to shoot him or harm him," Hazelitt told KTVU in an exclusive interview on Thursday. "I was looking to de-escalate the situation."

"Everybody has a story," Hazelitt said. "I’m not sure what his story is. I don't know what caused his mental health crisis at the time. My opportunity to give him one more day was all I was thinking about. I wanted to give him the opportunity to see his children. He was talking about his children. So if I was able to get the knife away, get him the mental help that he needed, then that would pretty much give him extra life."

"I definitely feared for my life. But more importantly, I feared for his life."

Hazelitt then did something he has never done before: He saw that the man was wearing a thick coat. So he called the director of airport operations to turn off the air conditioning and crank up the heat.

The man started to sweat. Hazelitt saw his plan was working. And when the man started to take off his jacket, Hazelitt used a Taser to subdue him, and then rushed in to wrestle away the knife. The plan worked.

A terminal at Oakland International Airport was closed for hours on Tuesday because of a distraught man who was armed with a knife and threatening to kill himself. Police were able to deescalate the frightening situation with the turn of a knob.

"Time is your best friend," Hazelitt said, adding that his crisis team had been talking to the man and feeding him apples and bananas during the four-hour ordeal, which caused flight delays.

The man was taken to John George psychiatric hospital in San Leandro, the sheriff's office said. He was not arrested for the airport scare; but he was wanted in another county on an outstanding warrant.

"But this officer thought outside the box. Nothing in the manual says 'Turn the AC off.'"

Adam Bercovici, a best practices police expert who used to be a lieutenant for the Los Angeles Police Department, said that police officers de-escalate situations like this regularly, but the public often focuses on the negative, such as when officers shoot and kill people.

"This is a job well done," Bercovici said. "It's important to focus on when good work is done. Time and time again, all across the nation, police are de-escalating situations. When we don't, then it becomes an issue."

Part of being a good police officer, Bercovici said, is being innovative and thinking on your feet.

"But this officer thought outside the box," he said. "Nothing in the manual says 'Turn the AC off.'"

Santa Clara University criminal law professor W. David Ball concurred with the ingenuity of what Hazelitt did, crediting both his training and experience for remaining calm under pressure.

"It's important to have ice in your veins at these key moments," Ball said. "Not to take the shot, but to let yourself coolly assess the situation." 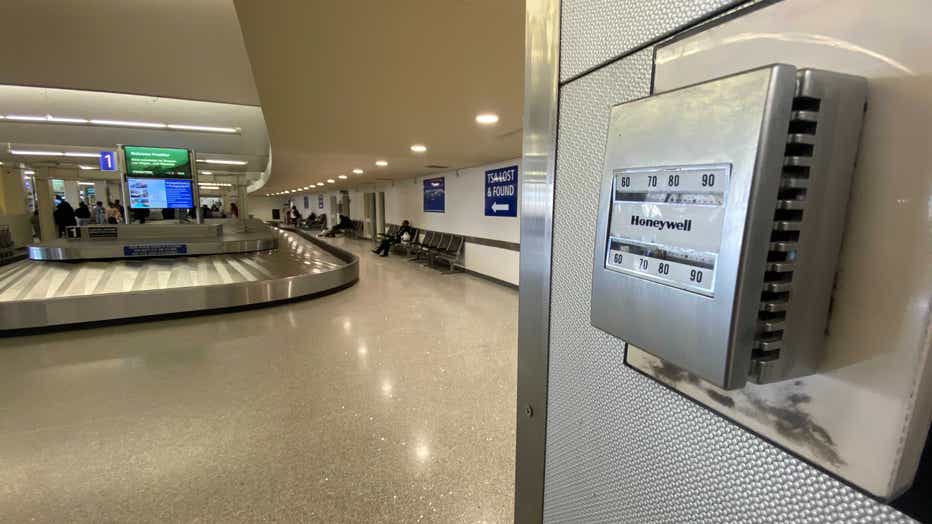 Sgt. Jeffrey Hazelitt used heat to force the man with the knife to get distracted.

For his part, Hazelitt downplayed his creativity.

He said while he had never manipulated a person's behavior before by using temperature, he did say that he learned in his SWAT and hostage negotiating training that people can be flushed out of places by turning off their water or power.

"I just saw the opportunity to get him warm and uncomfortable," he said.

But Hazelitt's superiors certainly aren't being shy about touting his capabilities.

"Sergeant Hazelitt is a trained professional," Sheriff's spokeswoman Tya Modeste said. "His actions on Tuesday were indicative of who he is as a person and a professional. He’s passionate about his job, and he always puts others before himself."

Hazelitt is a member of the Special Response Unit and works closely with the Sheriff's Crisis Intervention Unit, which has existed for about 20 years.  He was the team leader for the now-disbanded Urban Shield Program and has been assigned to Oakland Airport Police Services for years.

Hazelitt also did not want to compare his de-escalation tactics with what other officers do.

"What I can speak to is my experience," he said. "I can't make judgments about others. Situations rapidly evolve."

And to anyone in the public who might want to Monday-morning quarterback about Tasing the person or any other policing matter?

"I would welcome anyone to step into my shoes," Hazelitt offered.

As for how he felt after the situation resolved without incident, Hazelitt said simply: "I just continued with my job. I felt OK with the outcome. I hope he got the resources he needs."