SACRAMENTO, Calif. - As the winds returned this week, the Caldor Fire roared over the Sierra crest and bore down on the southern end of Lake Tahoe. Perhaps more than with other wildfires in the Western U.S., this one resonates the world over. Tahoe is an international destination, a glorious wedding backdrop, a sparkling jewel in John Muir’s Range of Light.

The postcard photos of Emerald Bay are as iconic as those of another famous California landmark, the Golden Gate Bridge.

But Tahoe, and the granite ridges and forests and rivers around it, is more than that. To millions of Northern Californians, the region is as familiar as the backyard — less than two hours from the Sacramento metro area and its 2.3 million people and another hour (depending on traffic) from the San Francisco Bay Area.

In a typical summer, the wide path of destruction already cut by the Caldor Fire through the Eldorado National Forest would be filled with day hikers, backpackers, campers, kayakers and paddle boarders. Vacation cabins along the South Fork of the American River, many of which are now reduced to ash, would be filled with families from Sacramento, the Bay Area and beyond. Similar cabins that fill the woods on the outskirts of South Lake Tahoe await their fate amid the red flag warnings of the coming days.

Because the region means so much to so many, the Caldor Fire has captured the attention of Californians and others with a special connection to the region like no other in recent memory. 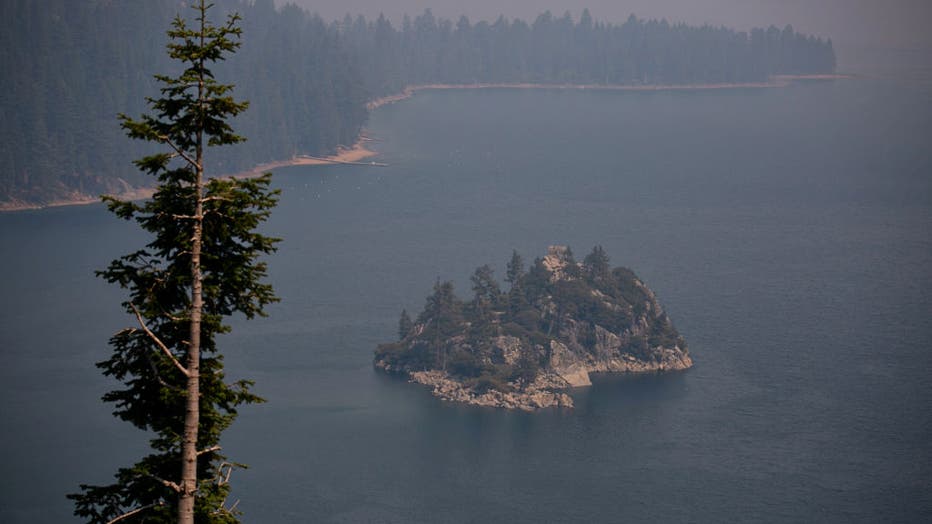 WHERE HAS THE FIRE ALREADY BURNED

The immediate danger is to South Lake Tahoe, the city of 22,000 that straddles the border between California and Nevada and is in the Caldor Fire’s path.

Before its run over the Sierra at Echo Summit, the fire had already destroyed hundreds of homes where it originated in the Sierra foothills and churned through tens of thousands of thickly forested acres along the Highway 50 corridor, one of the two main routes between Sacramento and Lake Tahoe.

The news here is not all bad. Over the weekend, before the Caldor Fire began its run toward Tahoe, fire crews prevented major damage to Sierra-at-Tahoe Ski Resort. Unpretentious and comparatively affordable, it’s beloved for its "certified unserious" vibe and lower-cost season passes that have made it popular for parents who want to teach their kids to ski or snowboard without having to pay college tuition-like prices.

Fire crews also saved Camp Sacramento, a 100-year-old family camp run by the city on Forest Service land just down the highway from the ski resort. Families have come every summer for two, three, even four generations to the old school camp (a cabin with an electrical outlet is considered a luxury). It’s where kids line up to ring the camp bell before meal time and then gather in age groups as Minnows, Chipmunks or Marmots for tie dye, archery, the Puppy Love hike.

Farther up Highway 50, near the top of Echo Summit, is the Echo Chalet, a cluster of summer cabins dating to the 1940s that was in the path of the flames before being evacuated. It’s perhaps best known for providing a water taxi across Twin Lake to a trailhead into the Desolation Wilderness, a popular backcountry of granite and lakes that was shaped by glaciers and now is being tested by fire.

'Only one way out of town': Thousands flee from Caldor Fire in Tahoe area

Flames from the Caldor Fire have reached the Echo Summit in Lake Tahoe. This, as tens of thousands of residents are under a mandatory evacuation order. Warnings were in place over the weekend, but on Monday those warnings became an order. Highway 50 was choked and at a standstill.

WHAT IS SOUTH LAKE TAHOE

South shore is a split screen. On one, the high-rise casinos of the Nevada side and their gambling crowds. On New Year’s Eve, at least pre-pandemic, they gave one heck of a street party. Heavenly Resort straddles both states and is renowned for its powder skiing, iconic lake views and — perhaps because of proximity — party atmosphere.

But South Lake Tahoe has another side. Most of the year-round residents would not consider themselves glitzy or glamorous. They are casinos workers, wait staff, bar tenders, ski instructors, construction workers, Forest Service or state park employees.

The median household income of roughly $49,000 is just 65% of the statewide median. Rents and home prices have soared during the pandemic, squeezing the working class and middle-income residents who make up the bulk of the town’s population. Besides the tourists, these are the evacuees who have packed up and fled as the Caldor Fire threatens.

WHAT REMAINS IN THE FIRE’S PATH

Like the monstrous Dixie Fire that ignited before it, the Caldor Fire continues to confound and outpace a massive firefighting force. It already has taken an unusual path by burning up to and over the Sierra crest. As it burns ever closer to South Lake Tahoe, it threatens to consume landmarks, campgrounds, summer cabins and places cherished by generations of visitors.

Fallen Leaf Lake, another cerulean postcard, is home to a Forest Service campground (upgraded with yurts), cabins and a summer conference center for Stanford University. Camp Richardson is a lakeshore stretch of cabins and tents (and an ice cream parlor that may be the most popular in Tahoe) that traces its earliest days as a resort to the turn of the last century and is a summer tradition for thousands. At Emerald Bay, if the fire gets that far, is Vikingsholm, a replica of a Scandinavian castle that has survived for nearly a century and now is part of a state park. As if in defiance of California’s ever-worsening wildfire season, it has a traditional sod roof.

If the Caldor Fire were to reach Emerald Bay, it would first have to tear through one of the most popular hiking trails in all of Tahoe — the Eagle Falls Trail. In non-drought years, snowmelt tumbles down from the Sierra crest and eventually cascades over boulders just above Emerald Bay, providing a strikingly sublime photo for tourists from around the world each summer.

This summer, that postcard picture is one of smoke and fire and fear. The Range of Light has burst into a range of flame, and so far there is no stopping it.