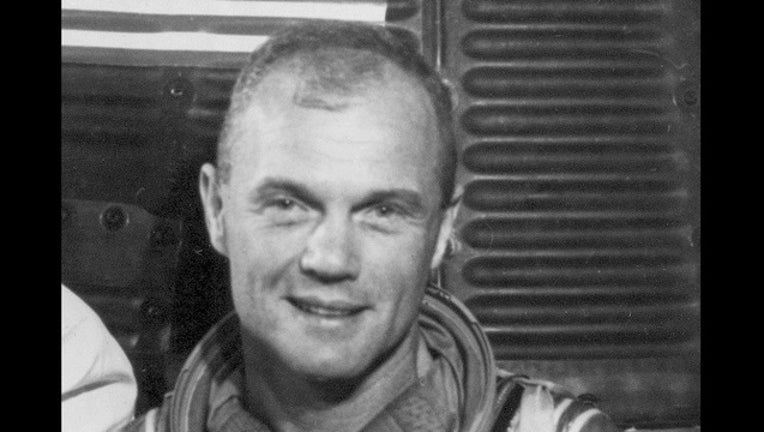 John Glenn during the Mercury program in 1962 (Photo: NASA)

WASHINGTON (AP) - The flag-draped casket of John Glenn, the first American to orbit the Earth, was covered in plastic to protect it from a steady rain as it was carried on a horse-drawn caisson to his final resting place at Arlington National Cemetery. Later, his widow, Annie, gave a kiss on the cheek to the Marine who presented her with the folded-up flag.

Glenn, who died Dec. 8 at age 95, was laid to rest Thursday in a private burial at Arlington attended by relatives and invited guests. His family scheduled the service for what would have been John and Annie Glenn's 74th wedding anniversary.

The former fighter pilot, history-making astronaut and longtime Democratic U.S. senator from Ohio had already been remembered in his home state, with a procession through the heart of downtown Columbus and a memorial service that drew roughly 2,500 people, including then-Vice President Joe Biden.

Thousands of mourners also visited his casket as it lay in repose at the Ohio Statehouse for a longer period than assassinated President Abraham Lincoln and others in history.

Those close to the family said they felt a sense of duty in allowing the public to mark Glenn's passing with the Ohio events, but Thursday's burial service was intended as a more personal mourning. It was closed to the public and the news media, although the military made a portion of it available for viewing via livestream.

Annie Glenn, 97, wore a red dress and held a single red rose as she sat under a tent at the gravesite, next to the couple's two children, John David and Carolyn. She spoke with apparent warmth to the Marine who presented her the flag, and their faces nearly touched before planting a kiss on him.

Six Marine pallbearers in dress uniforms carried Glenn's casket to the gravesite and set it down before carefully folding the flag. A military trumpeter played "Taps," Marines fired three ceremonial rounds from their rifles and mourners recited the 23rd Psalm. No one from the family made any remarks during the portion of the service that was livestreamed.

Glenn's pioneering Mercury flight in 1962 made him an instant national hero. He became the oldest man in space when he returned aboard the space shuttle Discovery in 1998 at age 77.

He had many accomplishments outside of his career as an astronaut. He flew 149 missions as a Marine fighter pilot in World War II and Korea, broke the transcontinental air speed record, served 24 years in the U.S. Senate and founded the John Glenn College of Public Affairs at Ohio State University.