A rescue team found the couple from Palo Alto on Saturday after 8 days missing.

"On behalf of Carol Kiparsky and Ian Irwin, we wanted to provide everyone with an update. Carol and Ian are in amazing spirits and have expressed their gratitude to everyone for the well wishes during their recovery. They are still hospitalized and being monitored due to the extensive abrasions from the dense brush. They have an excellent group of professionals monitoring them at a local hospital."

"Carol and Ian have met with both the Marin County Sheriff's Office and Search and Rescue Team members. They will be forever grateful for the hard work and dedication put forth by all of the Search and Rescue volunteers and First Responders from all over the Bay Area who searched every day for them.

"Thank you to everyone involved, we will be forever grateful for the work you do.

"The Irwin and Kiparsky family"

Marin County Sheriff's spokesman Sgt. Brenton Schneider said on Saturday that Irwin, 72, and Kiparsky, 77, most likely survived the week by drinking water from a puddle near where they were stranded.

They had brought no food, water or cell phones with them on their Feb. 14 hike near their rental cabin.

The vegetation where they were was so thick that rescuers had to crawl to get to them, said Schneider.

The dense undergrowth made it extremely difficult to carry the couple out any way other than by helicopter. A Sonoma County Sheriff's helicopter crew pulled the two seniors from the brush and got them to a nearby hospital.

Kiparsky and Irwin both suffered mild hypothermia, said Schneider, as they had been dressed in relatively light clothing and had to endure overnight temperatures that dipped into the 30s. 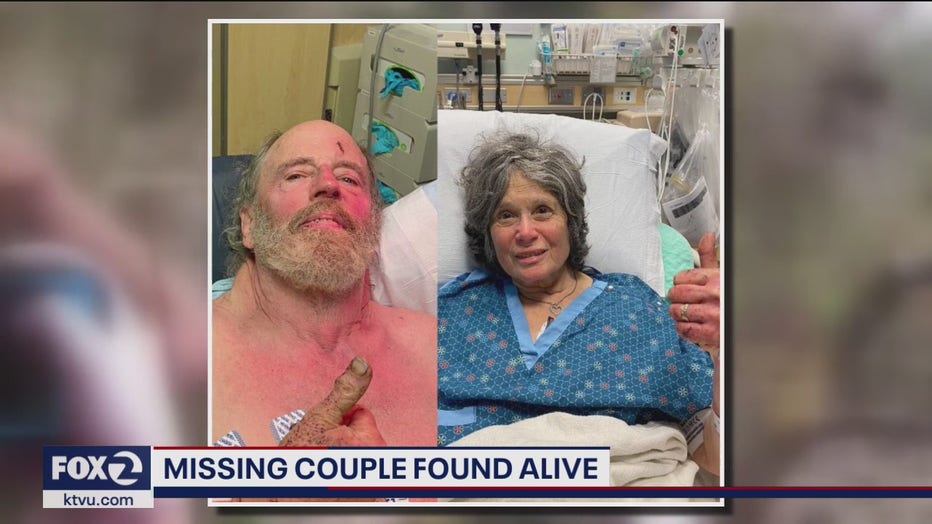