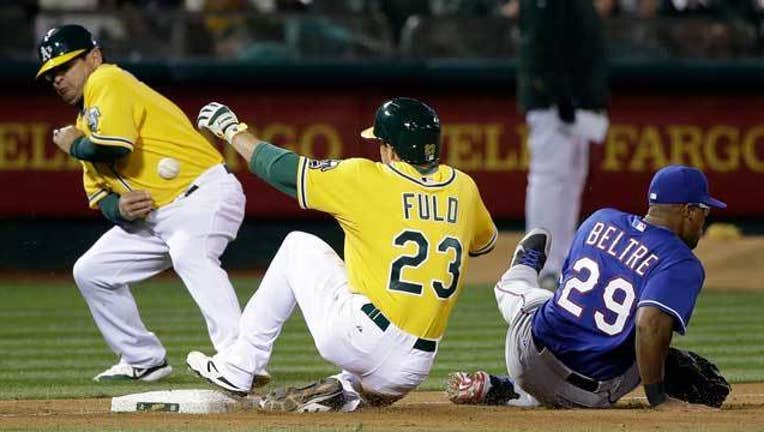 OAKLAND, Calif. (AP) — A healthy Prince Fielder hit a pair of run-scoring singles to help Jeff Banister earn his first victory as a major league manager, and the Texas Rangers bounced back from being shut out on opening day to beat the Oakland Athletics 3-1 Tuesday night.

Colby Lewis (1-0) struck out four and shut down his former club over six sharp innings in his season debut.

The Rangers snapped a scoreless streak of 21 regular-season innings when Fielder punched a single to shallow center that just eluded the outstretched glove of shortstop Marcus Semien in the third.

Fielder also had an RBI single in the fifth, and the Rangers got another run on an error by right fielder Craig Gentry.

Sam Fuld tripled in the sixth and scored Oakland's lone run on a groundout by Eric Sogard.

Texas shortstop Elvis Andrus then turned nice double play by taking it himself to second before firing to first to end the inning.

Neftali Feliz pitched the ninth for his first save, and 88th in 99 career opportunities.

A night after Sonny Gray took a no-hit bid into the eighth, 6-foot-5 right-hander Jesse Hahn couldn't make it another win by the rotation in his Oakland debut.

Hahn (0-1), who came to the A's from San Diego in one of nine trades Oaklandmade during a busy offseason even by this club's standards, was tagged for three runs and seven hits in six innings. He struck out three and didn't walk a batter but plunked two with pitches.

His next start comes Sunday against Seattle ace Felix Hernandez, who shut down the Angels on opening day.

Fielder went 0 for 4 with a strikeout in Monday's opener after missing most of 2014 following a cervical fusion of two disks in his neck last May, ending his then-major league-best streak of 547 consecutive games played since 2010.

Rangers: RHP Nick Tepesch, a candidate to make the rotation out of spring training who wound up at Triple-A Round Rock, has been shut down to recover from ulnar nerve irritation in his throwing elbow. GM Jon Daniels said the pitcher felt discomfort throwing a bullpen before camp broke and saw team physician Dr. Keith Meister. Tepesch will rest for three weeks and then begin a three-week throwing program.

Athletics: RHP Jarrod Parker threw 30 pitches in a two-inning simulated game and is set to throw three innings Monday at extended spring training in another step toward his return from a second Tommy John surgery that kept him out all of 2014. ... RF Josh Reddick (oblique) is scheduled to return Saturday after beginning the season on the DL.

Rangers: LHP Ross Detwiler makes his Texas debut Wednesday night against the A's after being acquired from the Nationals in December.

Athletics: LHP Scott Kazmir, a 15-game winner last season, looks to improve to 10-5 in his career against the Rangers after going 3-1 vs. Texas in 2014.