WALNUT CREEK, Calif. - The sound of an explosion followed by a fire that destroyed a senior care home on Castle Hill Road in  Walnut Creek caused chaos and confusion.

It happened just before 4 p.m. on Thursday afternoon in the residential neighborhood.

Investigators with the Contra Costa County Fire Prevention District say the fire appears to have started in the backyard of the care facility.

"A big puff of black smoke in the air and the flames were so high. It was really scary," says neighbor Jerri Camara.

People in the area described hearing an explosion followed by flames burning the care facility.

"Huge bang. I was afraid, felt like something had happened to my house. That's how close it felt. I felt it through my chest," says Camara.

The fire forced the evacuation of five older folks living in the care home.

Fire officials say everyone survived with no injuries,

Ellerie Ross, a high school student, says she saw a resident being rescued and wanted to help.

"I saw someone carry her out. I went in to help another lady out."

Fire officials say strong winds carried embers that caused minor damage to two homes behind the care facility and that embers jumped across Interstate 680 and landed on the 4th-floor balcony of an apartment building and caused a scare.

"I heard an explosion and the wall vibrated. The outside wall vibrated. I ran into the living room and it was really scary," says Elaine Perry who was evacuated from her apartment after embers landed on a balcony at her building.

Investigators say carelessly discarded cigarettes in the backyard where redwood trees are located may be the cause of the fire.

"We've confirmed the presence of oxygen tanks here. It's certainly possible that a tank like that could have caused the explosion sounds that our reporting parties heard," says Steve Hill, a spokesman with the Contra Costa County Fire Prevention District.

Two high school students say they're just glad they were able to offer some comfort to the rescued residents.

"One of the ladies here was very afraid so we're making sure she was okay," says 17-year-old Esther Sokolsky who lives near the care facility.

Fire officials say this is a reminder that vegetation is very dry and this could have easily been a whole lot worse.

They say creating defensible space around homes is crucial for what is expected to be a long and potentially dangerous fire season.

Fire officials said windblown embers from the blaze sparked another fire in the area that was quickly extinguished. 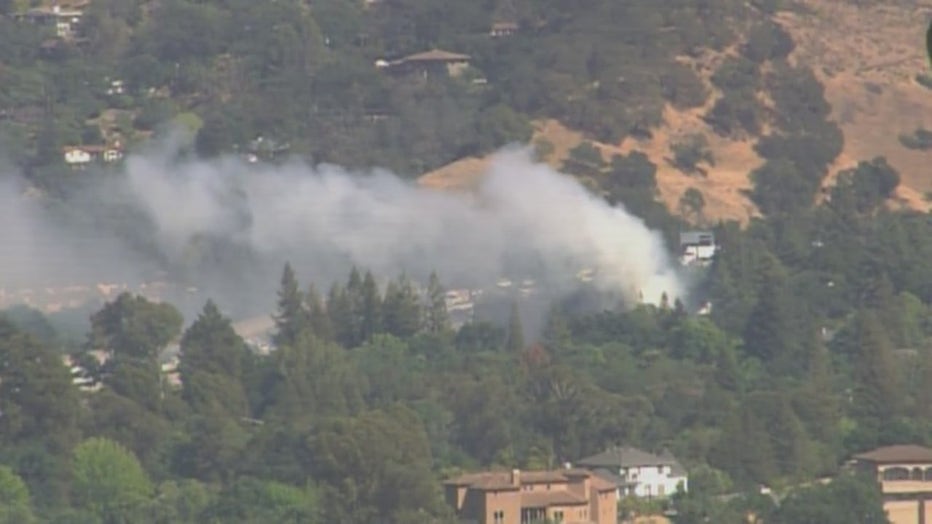