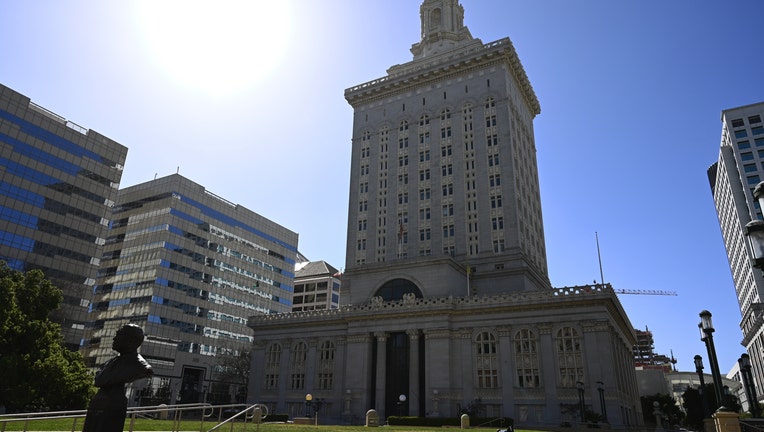 The outside view of the front of Oakland City Hall on a sunny day on April 9, 2021, in Oakland, Calif. (Samantha Laurey/Bay City News)

OAKLAND, Calif. - Roughly 1,000 homeless residents of Oakland may soon be able to find shelter on the city's former Army base following a resolution approved Tuesday by the City Council.

Councilmember Carroll Fife proposed the idea, and the City Council told staff to study it. Staff must return to the council with a report no later than the first council meeting in June.

The homeless intervention site would be located on the North Gateway parcel, 22 acres of the base at Wake and West Grand avenues. California Waste Solutions and Custom Alloy Scrap Sales are also each planning a development on the land. Few details were available Wednesday.

"It adds insult to injury that this parcel has been vacant for over a decade and it is only now that the public is being told that CWS will soon begin development," Fife said in a statement.

"I look forward to reviewing the findings of the report, resolving some of the discrepancies that have been shared, and addressing how the site could still accommodate temporary housing ahead of and concurrent to this development," Fife said. "We need accommodations now."

The discrepancies involve when the private companies will begin their projects. Permits for the CWS project may be approved as early as first of the year. Previously, the city said it may be two to four years before the project begins.

In the report, city staff are expected to resolve the discrepancies and provide a clear project timeline.

He said California Waste Solutions may move its recycling plant to the North Gateway parcel. But it may occupy only half or less of the site.

One-third of the site has the potential to house about 400 people, Tombolesi said.

Fife is primarily concerned with the homeless population in her district, District 3. District 3 has the most homeless encampments in the city, Tombolesi said.

The Wood Street encampment in District 3 has been the site of fires and death.

The city administration was tasked in 2020 with looking at the North Gateway parcel as a potential interim emergency homeless intervention, Tombolesi said, and Fife wants to get that investigation back on track.

City administrators told Fife's office that residential use of the site is prohibited until the California Department of Toxic Substances Control approves it. Environmental remediation may be necessary.