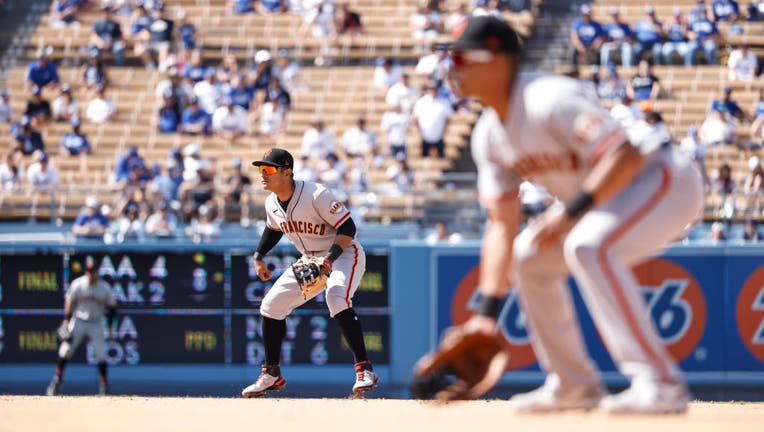 LOS ANGELES, CALIFORNIA - MAY 30: Donovan Solano #7 of the San Francisco Giants defends during a game against the Los Angeles Dodgers the eighth inning at Dodger Stadium on May 30, 2021 in Los Angeles, California. (Photo by Michael Owens/Getty Images

Gausman (6-0) allowed two hits, struck out seven and walked none before he was removed because of left hip tightness. He also helped himself with an RBI single in the fifth inning.

Gausman (6-0) joined Jack Coombs (1910 Philadelphia Athletics), J.R. Richard (1979 Houston) and Johan Santana (2004 Minnesota) as the only pitchers in the modern era with eight straight starts of at least five strikeouts and no more than one run allowed.

Austin Slater also connected against Kershaw (7-4), sending the Giants to their third win in the four-game set after Los Angeles posted a three-game sweep last weekend. San Francisco has the second-best record in the majors at 33-20 and is a half-game behind San Diego in the NL West.

The Giants had a 5-0 lead before the Dodgers rallied on a pair of two-run homers by Albert Pujols and Max Muncy.

Pujols' drive to left in the ninth was his 1,357th extra-base hit, which moved him past Babe Ruth for fourth on the career list. It was his third homer since joining the defending World Series champions on May 17 and No. 670 for his career.

After surrendering Pujols' homer with one out, Jake McGee struck out Will Smith and got Austin Barnes to fly out for his 12th save in 14 opportunities.

Gausman became the first San Francisco starter to win five games in May since Madison Bumgarner in 2014.

Kershaw came into the game 24-13 with a 1.79 ERA against the Giants, but allowed five runs for only the second time in 50 starts against the Dodgers' arch rival. The left-hander struck out six, but gave up seven hits and walked three.

Muncy connected for his 13th homer in the eighth.

Slater and Donovan Solano led off the game with singles. Slater scored on Evan Longoria's grounder before Dubón hit a towering fly ball down the left-field line that hit the foul pole to give San Francisco a 3-0 lead.

Slater led off the third inning with a drive to center for his seventh homer.

Dodgers: OF Mookie Betts was a late scratch from the lineup due to allergies. ... Manager Dave Roberts said SS Corey Seager (broken right hand) is taking grounders and throwing, but there is no timeline on when he can resume taking two-handed swings.

Dodgers: RHP Trevor Bauer (5-3, 2.07 ERA) — who is second in the NL with 91 strikeouts — takes the mound Monday in the opener of a three-game series against St. Louis.