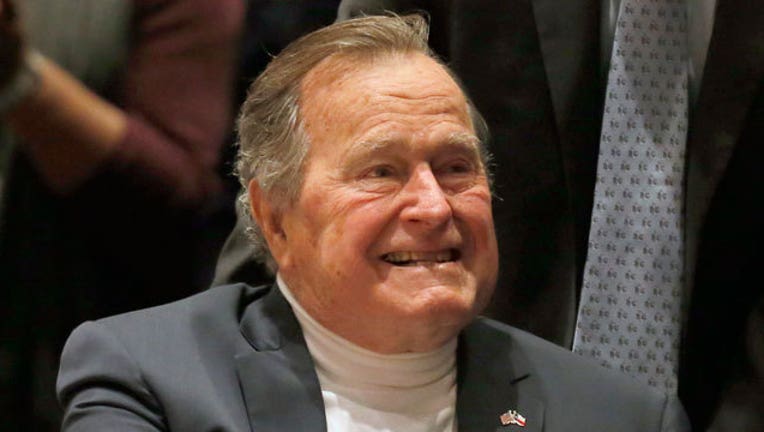 PORTLAND, Maine (AP) — Former President George H.W. Bush fractured a bone in his neck when he took a tumble at his oceanside summer home in Maine, but suffered no neurological problems and the injury will likely be allowed to heal on its own, his spokesman said Thursday.

Bush, at 91 the oldest living former president, was hospitalized in fair condition Thursday, a day after he fell at his home in Kennebunkport, officials said.

The fracture to his C2 vertebrae didn't impinge on his spine and didn't lead to any neurological deficits, and he never lost consciousness during the ordeal, spokesman Jim McGrath said in a statement. The 41st president was being fitted with a brace to immobilize his neck, McGrath said.

"He is in good spirits," McGrath said Thursday. He said the plan is to "let this injury heal on its own without surgery."

President Barack Obama called Bush on Thursday morning to wish him a speedy recovery, a White House spokesman said. Obama made the call from Oklahoma, where he spent the night ahead of a visit to a federal prison there.

Bush was being treated at the state's largest medical facility, where a children's hospital is named for his wife. A hospital spokesman said it was premature to speculate about when he'll be released. The family declined to say how he fell.

Bush, who has a form of Parkinson's disease and uses a motorized scooter or a wheelchair for mobility, has suffered other recent health setbacks.

He was hospitalized in Houston in December for about a week for shortness of breath. He spent Christmas 2012 in intensive care at the same Houston hospital for a bronchitis-related cough and other issues.

Bush, a Republican, served two terms as Ronald Reagan's vice president before being elected president in 1988. After one term, highlighted by the success of the 1991 Gulf War in Kuwait, he lost to Democrat Bill Clinton amid voters' concerns about the economy.

Bush, the father of Republican former President George W. Bush, was a naval aviator in World War II and was shot down over the Pacific. He also was a former U.S. ambassador to China and a CIA director.

He has skydived on at least three of his birthdays since leaving the White House. He celebrated his 90th birthday by making a tandem parachute jump near his Kennebunkport home. He celebrated a low-key 91st birthday with his family there.

During the winter, Bush and his wife, Barbara Bush, live in Houston.