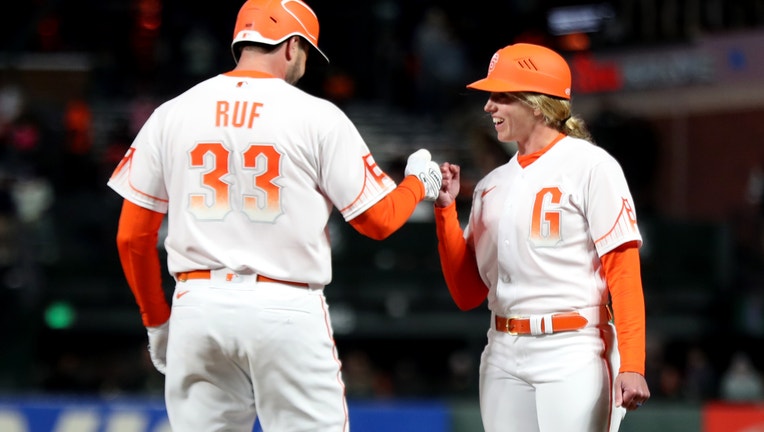 SAN FRANCISCO - An historic first in Major League Baseball happened right here in the Bay Area. For the first time ever, a woman coached on the field during a regular season game.

San Francisco Giants first base Alyssa Nakken will go down in the history books. For the first time in more than 145 years a woman took the field in an official capacity; inspiring a new generation of ballplayers and opening doors for a new generation in baseball.

It’s the kind of substitution that is usually routine in baseball. But when giants first-base coach Antoan Richardson was ejected in the third inning of Tuesday night's game against the Padres, Nakken made her regular-season on-field coaching debut.

For her part, Nakken was humble discussing the historic first, post-game. "I was prepared for this moment," said Nakken. "Never knew if or when it would happen, but was ready to step in if the team needed me to. So, yeah, I think it means a lot."

Before Nakken was on the baseline, she was at the University of San Francisco, taking part in the school’s sports management program. "She was a rock star in the classroom and she's clearly a rock star in her professional career as well," said Professor Nola Agha from USF. "She's an amazing person, a brilliant person, and clearly a very skilled coach."

Agha says Nakken's impact could be profound, creating opportunities for women in looking for a greater role in sports, and for teams looking for new talent pools. But, the biggest impact could be on a generation of girls who see Nakken on the baseline.

"We know for a fact that everyone needs a role model, and when you can see someone that looks like you in a position you want to be in someday, it creates that mental pathway," said Agha.

Mia Hoskins said learning that Nakken has made it all the way to the MLB is an inspiration. "I feel so inspired, like I could do that, in other sports or really anything, "said Hoskins. "Like, become a powerful woman role model, just like her."

Her father says girls are seeing new role models breaking down barriers all the time. "You want to be able to look on the TV, whether it's ESPN or ABC News or FOX News of whatever, you want to see people that look like you; doing what you aspire to do," said Mikhail Hoskins. "That's in all fields."

Nakken didn't take the field today but was busy coaching behind the scenes. Remember that it was 75 years ago Jackie Robinson broke the color barrier, and changed the game forever.