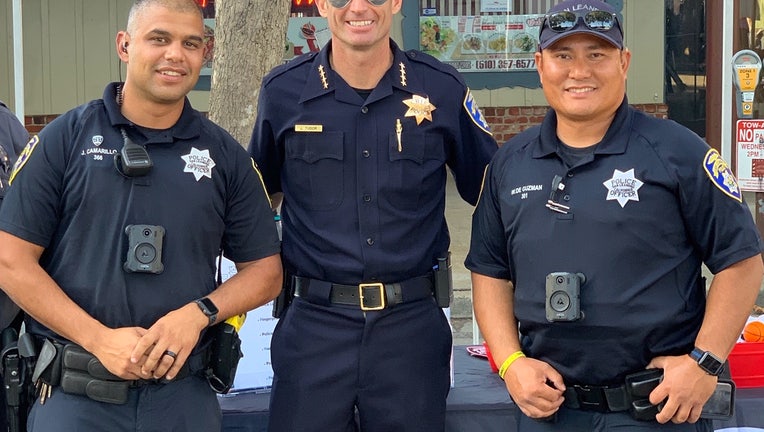 SAN LEANDRO, Calif. - When San Leandro nixed $1.7-million from its police budget last week, the city council also ended up cutting $700,000 from a special program that caters to the city's homeless population.

Now, the former fiancee of Steven Taylor -- the 33-year-old man who was killed by officers in April after customers reported that he was waving a bat inside a Walmart -- is imploring the council to slow down on making a drastic change to the police budget. She says the council should reconsider indiscriminately defunding the department amid the national outcry in the wake of George Floyd's death and anger toward police officers.

In fact, Edna Jane Reed wrote a letter to KTVU as well as to San Leandro's mayor, asking to save the police department's two officers and two case managers who are tasked with helping the homeless, like herself and Taylor.

One of the officers, she said, stopped Taylor, who lived near the tracks, from running in front of a train when he was having a mental breakdown and wanted to kill himself.

"If it wasn't for the homeless police program," Reed said, "we would never trust in the police and learn that there are some honest, real good police out there. And that they are not all bad and crooked."

Last week, the council decided to cut the homeless liaison officers, the outreach programmer, the school resource officer and four vehicles totaling $1.7 million. If the programs are to be restored, they will have to be recreated and then voted on in the next budget. Or, the money could be redirected elsewhere in the city, where the programs and employees would not directly serve the police department any longer.

"I knew that was our prized program," she said.

Russo Cutter helped personally support that effort five years ago, hoping to train officers to speak respectfully to the city's unsheltered population and offer them services instead of simply arresting them. The officers rode bicycles and were there to "treat people with dignity," she said.

The success of the program, Russo Cutter said, was "beyond my dreams. This is what community policing is all about. It’s what you want in a police officer. You want empathy and these officers were that."

But she ended up voting for the cuts because she wanted to let the community know she heard them. Protesters have been circling her home and demanding change. She is hoping that with community input, these positions can be restored.

While Russo Cutter is acutely aware of the national pain over Floyd's Memorial Day death in Minneapolis and the anger over police tactics like chokeholds, tear gas and overzealous attitudes, she also said, "you can't simply defund the police."

Russo Cutter is also acutely aware of the pain and anger in her own city.

Many have protested Taylor's death, saying that the two officers who entered the Walmart on April 18 should have been able to talk him down from waving his bat around, instead of deploying their Taser and gun. Taylor was struck by both the stun gun and bullets, and died inside the store.

Now, more than 60 days after his death, the officers' names have still not been made public, despite multiple inquiries by KTVU and by the ACLU.

The city has countered that the officers have faced death threats and releasing their names would cause them harm. The city has not been specific about these threats.

Meanwhile, the city council has asked the state attorney general to run a parallel investigation into Taylor's death. As of Tuesday, Xavier Becerra's office did not commit to taking on that investigation.

When asked, Russo Cutter said that she is hoping to get the identities of the officers "as soon as possible. The death threats were valid, but  I can encourage the chief and city manager to get the names out there."

For now, Reed said she's hoping that her two favorite officers get to keep their jobs. She is also someone who is sophisticated enough to not paint all police officers with the same brush.

"And this is coming from a convicted criminal who has no respect for the police especially after they killed Steven at Walmart, they took someone I loved deeply away from me," Reed said. "But I can honestly say that Officer Camarillo and Officer DeGuzman get all my respect because they have proved time and time again that they are truly good police officers."