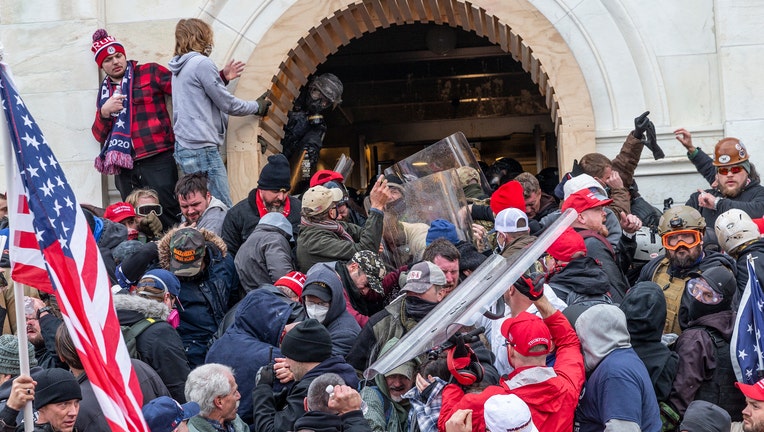 Rioters clash with police trying to enter Capitol building through the front doors. Rioters broke windows and breached the Capitol building in an attempt to overthrow the results of the 2020 election. Police used batons and tear gas grenades to event

GoFundMe will no longer allow users to raise money on its website to cover travel expenses to political events that could turn violent, such as the riot at the U.S. Capitol last week.

"Due to the violence, GoFundMe has removed numerous fundraisers intended to raise money for travel expenses," the company said in a statement to FOX Televisions Stations Tuesday. "GoFundMe will remove fundraisers for travel expenses to a future political event where there's risk of violence by the attendees."

The crowdfunding platform also reiterated its stance against fundraisers that endorse hate, violence, harassment or spreading misinformation regarding the 2020 election. Nearly 1,400 fundraising pages had already been removed in the months leading up to the Jan. 6 siege at the U.S. Capitol.

"We strongly condemn the violence and attempted insurrection and will continue to remove fundraisers that attempt to spread misinformation about the election, promote conspiracy theories and contribute to or participate in attacks on US democracy," the company added.

The company joined a string of others cracking down on extremist rhetoric and behavior in the wake of the U.S. Capitol melee.

Airbnb said it will warn all guests in the Washington region that it may bring legal action against them if they are members of hate groups or if they plan violent activities. It also told hosts to call a hotline if they suspect guests are violating Airbnb’s policy.

Furthermore, Airbnb said it’s also banning anyone from its platform who engaged in criminal activity in last week’s riot at the U.S. Capitol. The company said it is cross-referencing arrest records to determine who should be removed. The company wouldn’t say Monday how many people it had removed so far.

Twitter suspended more than 70,000 accounts associated with the far right QAnon conspiracy and Facebook is removing posts and content fraudulently claiming that the U.S. election was stolen as social media companies scramble to rein in harmful activity ahead of the presidential inauguration on Jan. 20.

Twitter's suspensions followed a flurry of actions by tech giants that silenced rival social media platform Parler, a magnet for the far right. Apple and Google removed Parler from their app stores late last week and Amazon took it offline Monday when it stopped providing it with web-hosting services, citing Parler's failure to remove a surge of dangerous content "that encourages and incites violence against others."

It has been nearly a week since pro-Trump rioters stormed the U.S. Capitol in an effort to stop lawmakers from certifying President-elect Joe Biden’s electoral win. Five people were killed, including U.S. Capitol Police Officer Brian Sicknick. Another woman was shot to death and three others died after succumbing to medical emergencies. A second Capitol Police officer, Officer Howard Libengood, reportedly died from an apparent suicide but it’s not clear if his death was related to the riot.

A GoFundMe page is now set up to help the family of Officer Sicknick.

The protections came as the FBI issued a bulletin warning of plans for armed protests at all 50 state capitals and in Washington ahead of President-elect Joe Biden's Jan. 20 inauguration.

Meanwhile, President Donald Trump denied he incited the riot as the House moves closer to impeaching him on Wednesday.

He targeted the lawmakers who are pushing for his ouster, saying that it's "a really terrible thing that they’re doing."

House lawmakers will first try to convince the vice president and Cabinet to act even more quickly to remove Trump from office, warning he is a threat to democracy in the remaining days of his presidency.

The Associated Press contributed to this report. The story was reported from Los Angeles.