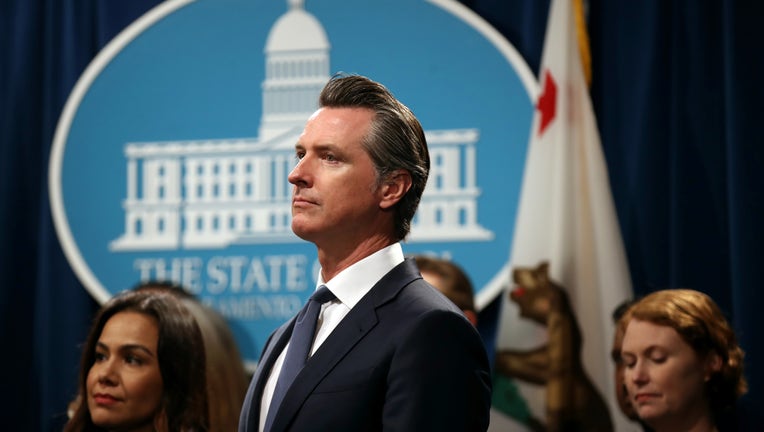 SACRAMENTO, Calif. - California's governor on Friday threatened a possible takeover of the troubled utility blamed for sparking deadly wildfires across the state with its outdated equipment unless it can emerge from bankruptcy ahead of next year's wildfire season with a plan focused on safety.

Gov. Gavin Newsom called all sides to a meeting early next week, saying he would personally try to mediate a solution involving Pacific Gas & Electric.

But if an agreement can't be reached, Newsom said, "then the state will prepare itself as backup for a scenario where we do that job for them."

PG&E has come under more scrutiny in recent weeks as it cut off power to millions of people to avoid a repeat of last year's deadly fire season.

The shutoffs have angered residents, businesses and local governments, who say the company has done a poor job of communicating.

It's unclear how the state could take over PG&E in the event it does not meet the June 30th deadline. But the governor's office pointed to General Motors as an example. The automaker filed for bankruptcy in 2009, and the federal government purchased a controlling stake in the company. The government later sold its shares once the company was on solid footing.

"That kind of a move would give the state a lot of control over the strategic direction that PG&E takes without getting it into the nitty gritty of running the day to day," said Michael Wara, director of the Climate and Energy Policy Program at the Woods Institute for the Environment at Stanford University.

Local governments, including San Francisco, have offered to purchase portions of PG&E's equipment for $2.5 billion so it could operate parts of the power system on its own. Asked if taxpayers would buy the company, Newsom said: "We're scoping all of that."

"It's not writing a check," Newsom said. "This is not plan `A,' but it is a plan. We would be irresponsible not to scope that plan. So we're not going to sit back and hope and hope an expectation that everything else works out."

Pacific Gas & Electric filed for bankruptcy earlier this year after a 2018 wildfire mostly destroyed the town of Paradise and killed 85 people. An investigation revealed the fire was started by one of the company's powerlines that was knocked down during a windstorm.

The utility is facing up to $30 billion in damages from that fire and others.

Shareholders and creditors have been battling for control of the utility in bankruptcy court, offering two competing plans for the company's future.

A federal judge has expressed concern the two sides are not making progress, and last week appointed a mediator to try and resolve the case.

In June, Newsom signed a law setting up a $21 billion fund that could help utility companies pay out claims for future wildfires as climate change makes them more frequent and destructive.

Utility companies would have to spend at least $5 billion on safety improvements and meet new safety standards to participate. PG&E would have to be out of bankruptcy by June 30th to use the fund.

Friday, Newsom called on PG&E executives, shareholders and creditors along with wildfire victims to meet with him. Newsom said he is confident the meeting will occur.

However, representatives for the largest groups of bondholders and shareholders did not respond to a request for comment.

"We welcome the governor's and the state's engagement on these vital matters and share the same goal of fairly resolving the wildfire claims and exiting the Chapter 11 process as quickly as possible," he said.