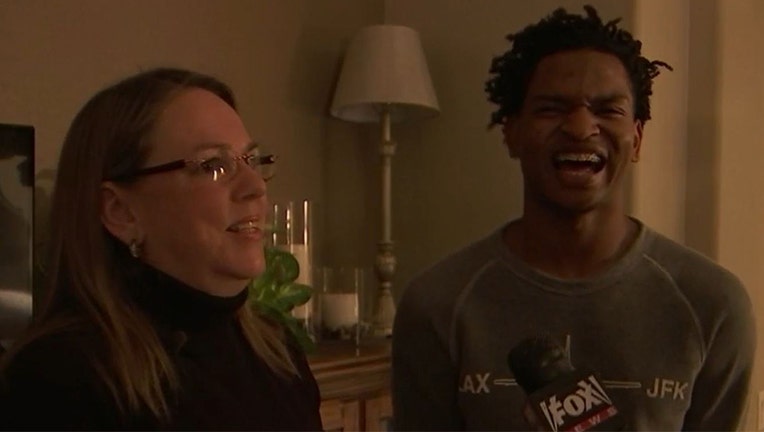 PHOENIX - An Arizona grandmother who accidentally sent a text around Thanksgiving to a stranger thinking he was her grandson has formed an unlikely friendship, and the two will now celebrate the holiday together for the fourth year in a row.

In 2016, Wanda Dench, of Mesa, Arizona, accidentally sent a text to Jamal Hinton, of Phoenix, thinking he was her grandson and inviting him to Thanksgiving dinner. Hinton is now 20 years old and Dench is now 62.

After the two exchanged selfies, they realized that it was a mix-up. But Hinton asked if he could still come to dinner, after which Dench texted, “Of course you can. That’s what grandma’s do ... feed every one.”

"I grew up in a military family. My dad is Navy, so we would invite vets over that we didn't know either for Thanksgiving," Dench said. "I saw his picture, and even though I invited him, I did not think for a second that he'd want to come to my house after seeing my picture!“

“Unfortunately, our schedules don’t usually line up too well and we live an hour and a half apart, but we have managed to have a couple dinners at her house and restaurants,” he said.

Hinton told the paper that he sees Dench about once every two months and regularly texts her to keep in touch.

This year, the friends will share a Thanksgiving meal at Hinton’s girlfriend Mikaela’s Aunt Tauna’s house, according to ABC News. It’s the fourth year of their holiday tradition.

Each year, Hinton posts a photo of himself and Dench celebrating Thanksgiving together.

Hinton said his biological grandmother does not text, but he “found a new grandma” through Dench’s initial text four years ago.