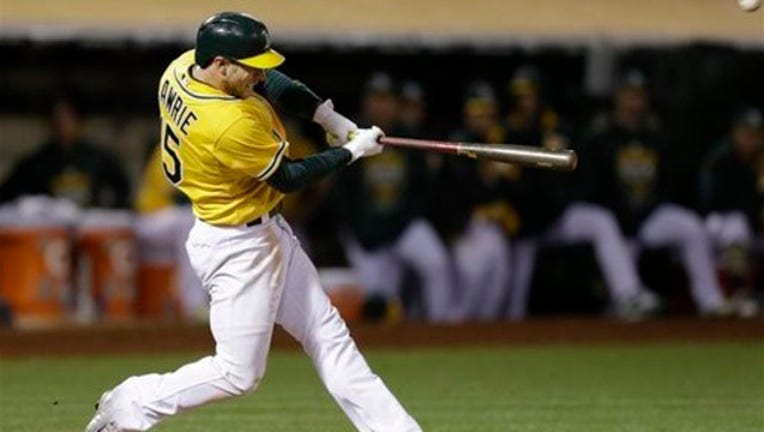 Gray (6-2) retired 11 straight after walking Brett Gardner to lead off the game. Brian McCann ended the streak with a leadoff home run in the fifth — his fourth in four games — and the Yankees scored again the sixth but managed little else against Gray and two relievers.

It was a sharp bounce back for Gray, who struck out five, walked two and allowed four hits and two runs.

Brett Lawrie added a two-run home run for the A's.

Oakland entered the night with the worst record in the American League but won for the fifth time in seven games.

Alex Rodriguez singled in the ninth to extend his hitting streak to 13 games for New York.

Vogt's two-run double in the third off Yankees starter Chris Capuano (0-3) capped a four-run inning and gave Gray all the run support he needed.

Oakland's young right-hander, who left his previous start after being hit in the right ankle by a line drive, also benefited from an unusually crisp defense behind him.

The A's went into the game leading the majors with 51 errors but made several stellar plays, including a diving stop and throw by third baseman Lawrie to rob Chris Young of a hit in the eighth.

Tyler Clippard retired one batter for his sixth save.

New York has lost two straight after sweeping Kansas City on the road.

McCann led off the fifth with his eighth homer of the season to trim Oakland's lead to 4-1. He joins Mike Stanley (1993) as the only players in franchise history to hit a home run in four consecutive games.

Brett Gardner's RBI grounder in the sixth made it 4-2.

Lawrie homered off Esmil Rogers in the eighth.

Yankees: CF Slade Heathcott is headed for the disabled list with a quad strain. OF/1B Ramon Flores is expected to be called up from Triple-A Scranton/Wilkes-Barre to take Heathcott's roster spot. ... Manager Joe Girardi confirmed that RHP Masahiro Tanaka will make his first start of the season Wednesday in Seattle. ... INF Gregorio Petit (bruised hand) took batting practice before the game.

Athletics: LHP Eric O'Flaherty (strained shoulder) is scheduled to pitch one inning Saturday for Single-A Stockton in what could be his final rehab appearance. ... RHP A.J. Griffin (elbow surgery) will throw a bullpen session then begin his rehab with a start in Stockton on Tuesday. ... OF Coco Crisp (cervical strain) will undergo a bone scan Monday before receiving an epidural in Los Angeles.

Athletics: RHP Jesse Hahn (2-4), who pitches against New York on Saturday night, has allowed seven unearned runs this season, the most in the AL.