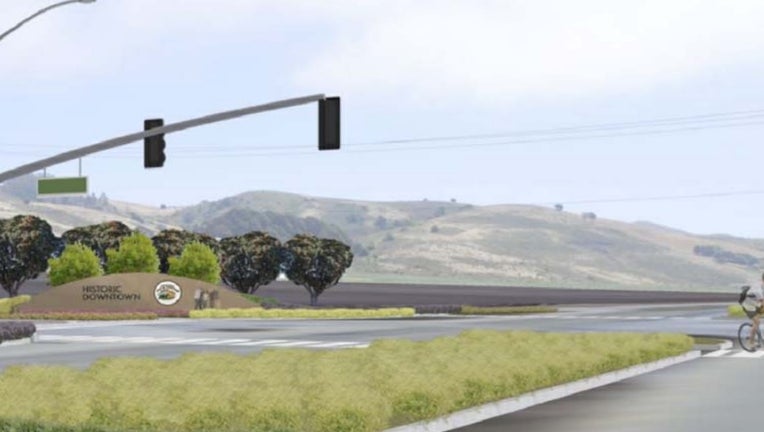 Photo: City of Half Moon Bay.

HALF MOON BAY, Calif. - The city of Half Moon Bay broke ground Thursday on a traffic safety project along state Highway 1 that will realign its intersection with Main Street and Higgins Canyon Road.

The intersection between Highway 1 and the two roads is currently regulated only by stop signs. The city's project would convert those stop signs to traffic signals and add signalized pedestrian crossings and designated pavement markings for bicycles on southbound Main Street.

The highway's intersection with Higgins Canyon Road will also be entirely realigned for improved safety, adding landscaped highway medians and a pair of large concrete entry structures that will funnel traffic safely to Main Street, according to the city.

City officials expect the project to take about a year.

"Not only will this project improve this much-used intersection and make it safer for all uses, it will be a new, more attractive gateway into our city," Half Moon Bay Mayor Adam Eisen said.

The city will use funds for the project from San Mateo County's Measure A, which voters first passed in 1988 and extended in 2004 to provide funding for transit infrastructure projects.

The Highway 1 project accounts for the southern portion of the city's Highway 1 Safety Operational Improvement Project, which is intended to improve traffic safety and flow along the highway between North Main Street and Spindrift Way and between Wavecrest Road and Seymour Street.

According to the city, the southern portion of the project will cost approximately $4.6 million in funding from Measure A and the city's general fund.