Community left in shock after Half Moon Bay shootings

Community members are deeply pained after Monday's mass shooting in Half Moon Bay. A chaplain was called to the crime scene as well as translators. The two shootings that killed seven people, happened at related nurseries where the suspect is said to have been an employee.

HALF MOON BAY, Calif. - Seven people were killed in a pair of shootings in Half Moon Bay on Monday – a normally quiet coastal city known for farming, tidepools and an annual pumpkin festival, authorities said.

The suspected shooter – 67-year-old Chunli Zhao of Half Moon Bay – turned himself in at a sheriff's department substation where he was taken into custody around 4:40 p.m., the San Mateo County sheriff's office said.

A witness took video of his takedown arrest, as detectives had him lay on the ground in the parking lot, and placed his hands behind his back.

Not much was immediately known about him or the motive for the mass shooting.

However, San Mateo County Sheriff Christina Corpus said that they believe he worked at one of the agricultural facilities where the shootings took place and that the victims worked there as well. The shooting scenes are about three miles apart.

"What a tragedy to see these innocent people, to lose their lives," Corpus said.

Corpus said the shooter appears to have acted alone.

Half Moon Bay Vice Mayor Joaquin Jimenez said the victims included Chinese and Latino farm workers. Some workers lived at one of the facilities and children may have witnessed the shooting, as they were leaving school for the day, she said. Corpus said it wasn’t immediately clear how the two locations were connected.

A semi-automatic handgun was used in the shootings and was located in Zhao's car, authorities said.

One of the crime scenes was located at a mushroom farm in the 12700 block of San Mateo Road, near the Spanish Town shops, where San Mateo County sheriff's deputies responded around 2:22 p.m.

7 dead in Half Moon Bay shootings, suspect in custody

We are learning developing details from San Mateo County Sheriff's Department after a suspect was taken into custody Monday for shooting at two different nursery locations in Half Moon Bay. At least seven people are dead, according to officials. 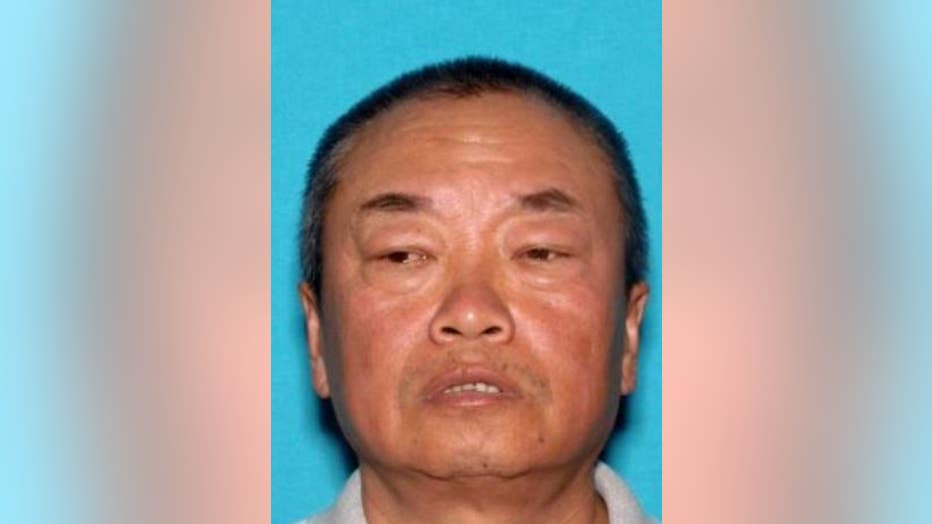 Chunli Zhao was identified as the alleged gunman in a pair of shootings that left seven people dead in Half Moon Bay on Monday.

Authorities said four victims were found dead at that scene and a fifth victim was taken to Stanford Medical Center with life-threatening injuries.

Shortly thereafter, three more victims were found dead at a second crime scene, at another mushroom farm, in the 2000 block Cabrillo Highway, which is about a mile from the first crime scene.

The description of Zhao's vehicle, a maroon SUV, and his license plate set off a manhunt. A sheriff's deputy spotted the vehicle, just before 5 p.m.

Authorities give an update on the deadly Half Moon Bay shootings, where seven people were killed at two separate nursery locations that appear to be connected on Monday.

Witness video of Half Moon Bay shooting suspect being arrested

A video taken by a witness of the the suspect in the Half Moon Bay shootings on Monday shows him being taken into custody without incident.

At a news conference Monday evening, San Mateo County Supervisor Dave Pine denounced the tragic event and said there are too many guns on the streets.

"This is a horrific event, one we would never imagine would occur in San Mateo County," said Pine. "Gun violence in this country is at completely unacceptable levels, it's really hit home tonight. Our hearts are broken."

Kati McHugh was one parking spot over from when Zhao was spotted in his vehicle by the deputy.

"It surprised me to see the officer asking me quietly to get back from my car and I scooted back a little bit and then he asked me to get farther back and farther back."

She said they surrounded Zhao as shown in the video.

"They had their guns drawn. They approached from behind the car, uh, pretty tight formation." McHugh said from a close proximity, the sheriff's deputies asked several times for Zhao to get out of his vehicle before he complied.

The FBI arrived in Half Moon Bay to assist the sheriff's department with the investigation.

The sheriff said investigators are still working to identify the shooting victims. Translators were brought to the scene to speak with some of the witnesses.

The San Mateo County District Attorney's Office is reviewing the case and is also interviewing the suspect.

Multiple people shot and killed in Half Moon Bay, suspect in custody

At least four people were shot and killed at two separate locations in Half Moon Bay on Monday. San Mateo County Sheriff says a suspect is in custody and there is no threat to the community at this time.

Gov. Gavin Newsom said he was notified about the shooting in Half Moon Bay while visiting victims of another mass shooting that happened in Southern California's Monterey Park over the weekend. Ten people lost their lives in that shooting.

"At the hospital meeting with victims of a mass shooting when I get pulled away to be briefed about another shooting. This time in Half Moon Bay. Tragedy upon tragedy," Newsom said in a tweet.

A family reunification center has been set up at the IDES Hall on 735 Main Street in Half Moon Bay.

Half Moon Bay is a small coastal city with agricultural roots, home to about 12,000 people. The city and surrounding San Mateo County area is known for producing flowers as well as vegetables like brussels sprouts. The county allows cannabis farming in some areas.

It’s a majority white community and about 5% of the population is Asian, according to Census data.

Community left in shock after Half Moon Bay shootings

Community members are deeply pained after Monday's mass shooting in Half Moon Bay. A chaplain was called to the crime scene as well as translators. The two shootings that killed seven people, happened at related nurseries where the suspect is said to have been an employee.

There were multiple victims in a pair of shootings in Half Moon Bay on Monday, authorities said. 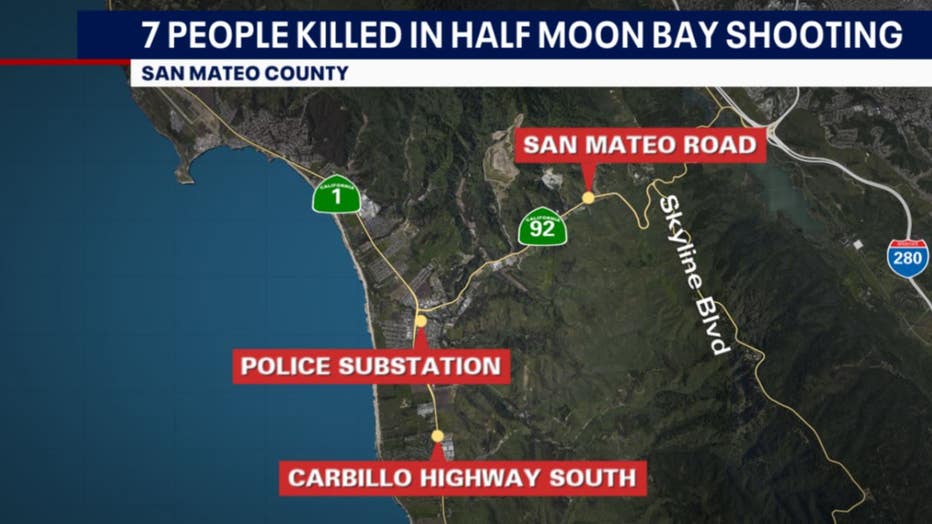 A map shows the locations of two deadly shootings in Half Moon Bay that are connected. A third location on the map is where the suspect was taken into custody.