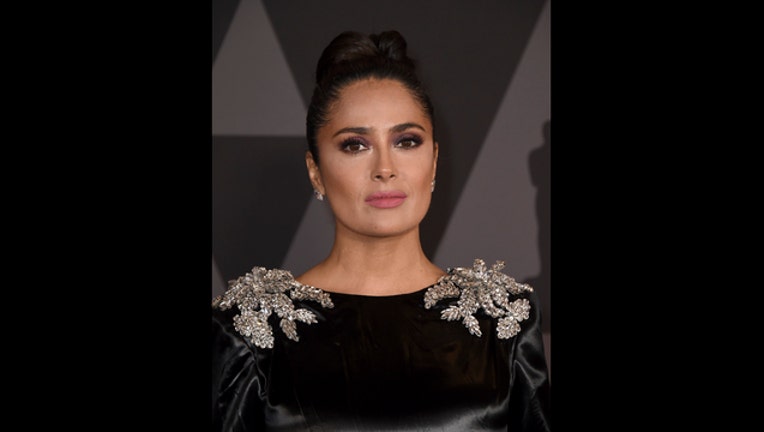 Salma Hayek arrives at the 9th annual Governors Awards at the Dolby Ballroom on Saturday, Nov. 11, 2017, in Los Angeles. (Photo by Jordan Strauss/Invision/AP)

NEW YORK (AP) -- In one of the most vivid accounts yet of Harvey Weinstein's alleged abuse and harassment, Salma Hayek says the disgraced movie mogul turned the making of her 2002 passion project, the Frida Kahlo biopic "Frida," into a nightmare after the actress refused Weinstein's relentless advances.

"For years, he was my monster," Hayek wrote in an op-ed published Wednesday by The New York Times.

Her refusals -- of massages, showers and sex -- enraged him, she wrote. "I don't think he hated anything more than the word `no,"' wrote Hayek.

Hayek, who regularly starred in films released by Weinstein's Miramax in the 1990s, credited Weinstein with helping her start her career. But she said that the movie mogul would turn up at her door "at all hours of the night, hotel after hotel, location after location."

When Hayek brought "Frida," which she was producing, to Miramax to distribute, Weinstein made outrageous demands as payback. Hayek said he insisted on rewrites, more financing and, most heinously to her, a sex scene with full frontal nudity. He even threated to kill her, she said.

In order to finish what was a labor of love for Hayek, she agreed. But she said she had a nervous breakdown while shooting the scene. "My body wouldn't stop crying and convulsing," wrote Hayek.

Even still, Weinstein initially refused to give the movie a theatrical release. He eventually relented after pressure from director Julie Taymor and Hayek. It went on to gross $56.3 million worldwide and land six Oscar nominations, winning two.

Dozens of women have accused Weinstein of sexual harassment, and numerous women have said he raped them. Weinstein, who is currently under investigation for sexual assault in four cities, has denied all allegations of nonconsensual sex. Representatives for Weinstein didn't immediately return messages Wednesday.

"Why do so many of us, as female artists, have to go to war to tell our stories when we have so much to offer? Why do we have to fight tooth and nail to maintain our dignity?" Hayak wrote. "I think it is because we, as women, have been devalued artistically to an indecent state, to the point where the film industry stopped making an effort to find out what female audiences wanted to see and what stories we wanted to tell."