At Lake Chabot Regional Park, 600 goats are grazing to create fire breaks and assist the East Bay Regional Parks District and its firefighters in reducing fire fuels and hazards.

OAKLAND, Calif. - In the water-parched East Bay hills, herds of goats are helping to prevent fires -- one bite at a time.

But they are not alone. Firefighters are clearing brush and removing dead trees. And millions of dollars are being invested in projects to reduce fire risk.

"We’ve been chronically busy," said Goats R Us owner, Terri Oyarzun. "350 goats can take down about an acre a day of average growth."

For 27 years, Oyarzun’s business has been growing, with thousands of goats spread out at several East Bay parks. Nearly 600 are at Chabot Park chomping away at dry vegetation this week.

"They’re the cutest things on earth. We love them and they have the greatest personalities," she said. "But they’re here to do a job."

While using goats is not new, the East Bay Regional Parks District said 65% of the land is grazed, targeting some 832 acres in areas within 200 feet of homes at 13 different parks. 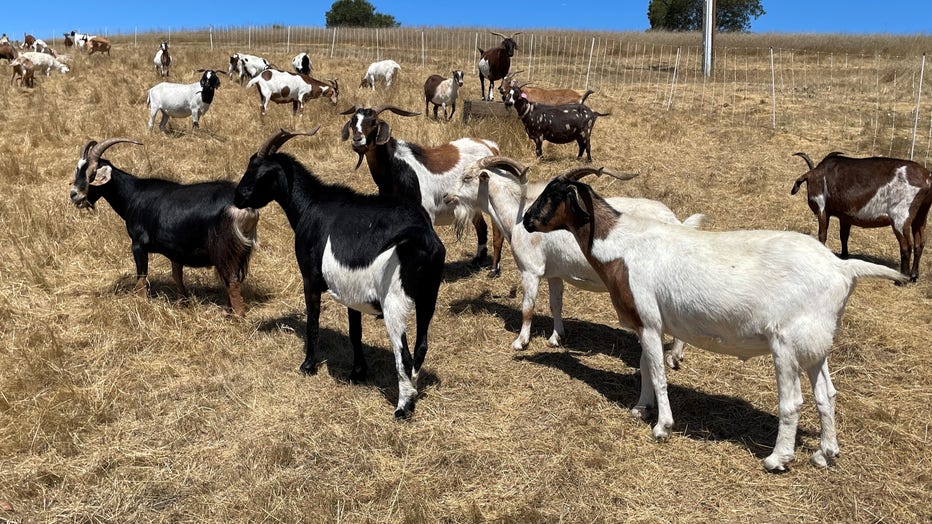 The herds cost the district $500,000 a year for their services, according to Assistant Fire Chief Khari Helae.

"It’s an investment in making sure we’re doing our part," said Helae. "With climate change and the fact that our vegetation is being affected from climate change, it’s necessary to ramp up our fuel reduction program."

That program uses several strategies and costs millions of dollars. At Lake Chabot Regional Park and along nearby trails, a new project costing $10 million is underway.

A 15-person hand crew is tasked with taking down trees, many of which firefighters said have been dying due to drought. They’ve been left standing and dangerous.

Other limbs and brush are being cut back or cleared to make sure they’re addressing areas where the goats cannot.

"We’re going in to reduce those trees, thin them out and that will make it, so it’s not such a fire hazard," Helae said. "If we have areas that are uncontained…it has the potential to produce large wildfires and flame lengths that are larger than we can control."

Additionally, other funding is spent on contractors, mechanical equipment and the herds of cattle, sheep and goats.

Firefighters say the hard work and money has already paid off.

A vegetation fire a few weeks ago near the Oakland Zoo quickly spread to park property, however, they say newly created fire breaks helped stop it from growing and threatening homes.

"For us, it was a proven example that the combination of fuels management along with the quick fire response, is an effective method of keeping our neighbors safe from catastrophic wildfire," Helae said.