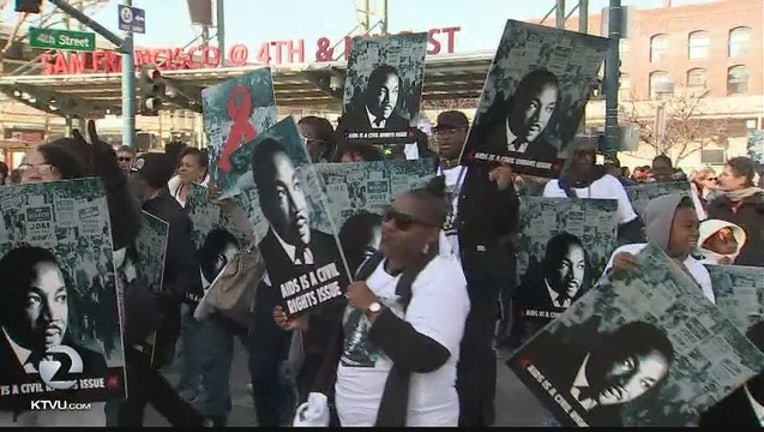 File art - All around the Bay Area, you can find opportunities to honor the Rev. Dr. Martin Luther King Jr. on Monday. King was assassinated in 1968 in Memphis. (Photo by Spencer Platt/Getty Images)

(KTVU/BCN) - From breakfast all the way through to the end of the day, the Bay Area is holding events to commemorate the Rev. Dr. Martin Luther King Jr., including parades, rallies and opportunities for service.

MLK Day was established as a federal holiday in 1983, and Congress designated it a National Day of Service in 1994. In the Bay Area, as in many other states, people looking to volunteer have many opportunities.

Berkeley Adult School offers a chance to kick off the day with the eighth annual Martin Luther King Jr. breakfast. The event begins at 8 a.m. at the school, 1701 San Pablo Ave.

Another 8 a.m. breakfast, this one in San Francisco -- the labor and community breakfast held at the Marriott Marquis Ballroom, 780 Mission Street.

The City of El Cerrito is holding its 30th annual MLK parade and rally, starting with an 8:30 rally at City Hall Plaza, Manila and San Pablo avenues. The march ends at El Cerrito High School.

In Santa Cruz, a march and rally held by the city's police department and the NAACP Santa Cruz County Branch kick off at 9 a.m. at Cathcart Street between Cedar Street and Pacific Avenue.

Cities all over the area are spotlighting volunteer activities, including the fourth annual East Palo Alto mayor's tree planting and MLK Day of Service at 9 a.m. in MLK Park, 435 Daisy Lane.

Back in the East Bay, the East County Branch of the NAACP will hold their 6th annual prayer breafast. Admission is free and it's at Martin Luther King Jr. Junior High Schoool in Pittsburg.

And a bit further east, in Antioch, an event featuring music, speakers and dance hosted by Anitoch High School begins at Eells Stadium for a 12 p.m. rally. A celebration will follow from 1:30 to 3:30 p.m.

Moving into the afternoon, Carolyn McKinstry, a civil rights advocate and witness to the 1963 bombing of the Sixteenth Street Baptist Church in Birmingham, Alabama, will speak at the Hayward Annual MLK Birthday event.