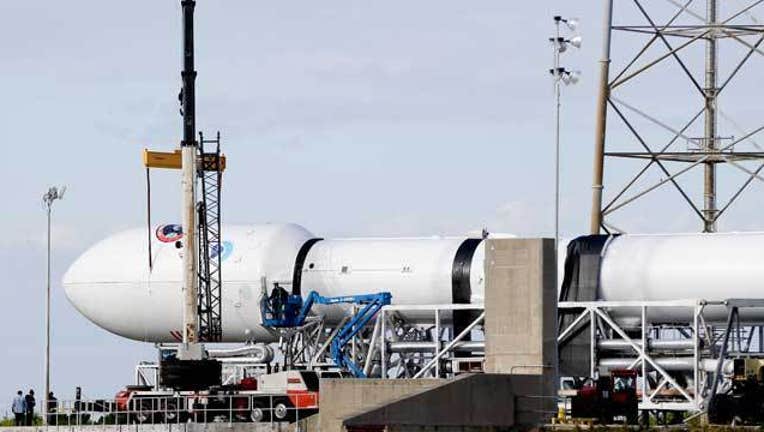 SpaceX called off its sunset launch with just 12 minutes remaining in the countdown because of gusts of 115 mph several miles up — strong enough to damage the rocket in flight.

It was the private company's second attempt in three days to launch the spacecraft first envisioned by former Vice President Al Gore and resuscitated by NASA, the National Oceanic and Atmospheric Administration and the Air Force.

"Extreme wind shear over Cape Canaveral," SpaceX's founder and chief executive Elon Musk warned via Twitter a few hours before Tuesday's try. "Feels like a sledgehammer when supersonic in the vertical. Hoping it changes."

It didn't, and SpaceX decided it was too risky to fly.

SpaceX must launch the observatory by Wednesday or face a delay until Feb. 20. The moon — lunar gravity to be more precise — would be in the way of the spacecraft during that eight-day blackout.

Also on tap will be a bid by SpaceX to land its leftover first-stage booster on an ocean platform. Last month's inaugural test ended in flames after the launch of a supply run to the International Space Station.

Loaded with science samples, bad spacesuit parts and other broken equipment, the Dragon departed the space station four hours before the Falcon's planned liftoff. Splashdown was set to occur in the Pacific off the Southern California coast 1½ hours after the scuttled launch.

Once aloft, the observatory, dubbed DSCOVR, will fly to a point 1 million miles from Earth in direct line with the sun to watch for incoming geomagnetic storms that could trigger power outages on Earth. This so-called Lagrange point, located 92 million miles from the sun, would provide as much as a one-hour lead time to prepare for potentially disruptive solar outbursts.

In addition, DSCOVR will provide a steady stream of pictures of the entire sunlit side of Earth. It was Gore's idea in 1998 to provide continuous views of Earth from afar that led to this space weather satellite. There was no immediate confirmation as to whether Gore returned for the launch attempt Tuesday as expected

Sen. Bill Nelson, D-Florida, said from Washington that there hasn't been a full, sunlit picture of the Earth since Apollo 17 in 1972 — NASA's last manned moon-landing mission. Subsequent images have been stitched together, he noted, for composite shots.

The $340 million DSCOVR mission began as Gore's Triana, named after the lookout who first spotted land on Christopher Columbus' voyage to the New World. It was canceled for political reasons, however, and the spacecraft put in storage in 2001. NASA and NOAA resurrected it several years later and made the sun its primary mission, with Earth-gazing a secondary objective.

In a repeat of a ground-breaking experiment, SpaceX will fly its leftover first-stage booster to a platform floating 370 miles off the Florida coast. Last month's test came close, but ultimately failed; the booster ran out of hydraulic fluid for the guidance fins, landed hard and tumbled into the Atlantic in flames.

SpaceX added extra hydraulic fluid for this second test, intended to demonstrate money-saving rocket reusability. But company officials warned the booster would be coming in faster this time from about 80 miles up, making it harder to nail the vertical touchdown. The odds of success remained no better than 50-50, officials said.

Musk intends to land boosters back on firm soil, once the operation is perfected. On Tuesday, officials at Cape Canaveral Air Force Station announced that SpaceX will lease a launch complex once used to shoot off Atlas missiles, and convert it into its first-ever booster-landing pad.

"It's a whole new world," Brig. Gen. Nina Armagno, commander of the 45th Space Wing, said in a statement.