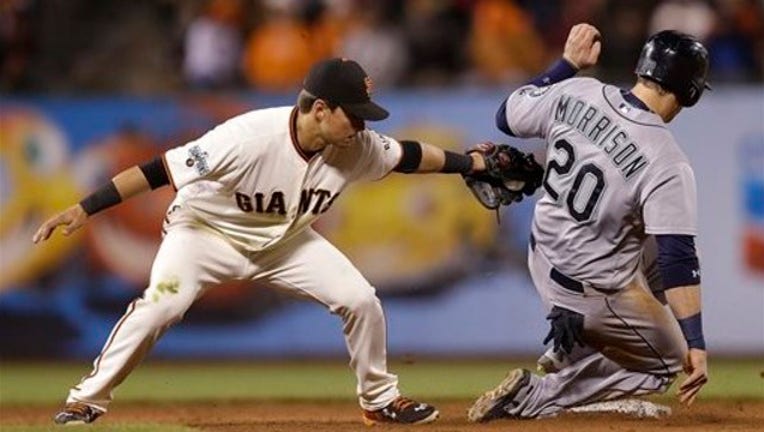 SAN FRANCISCO (AP) — The Seattle Mariners pushed it on the bases and produced the timely hits to add on late in the game, and they got a stellar start from Taijuan Walker.

"A little life in this team, how about that?" manager Lloyd McClendon quipped.

Kyle Seager hit his 11th home run with a solo shot in the eighth, Walker struck out six in seven innings and the Mariners beat the San Francisco Giants 5-1 on Monday night.

Logan Morrison hit a go-ahead single in the fifth to support Walker (4-6), who outpitched Tim Hudson to win consecutive starts for the first time all season. The right-hander earned his first interleague victory after going 0-3 in his first three.

The Mariners bounced back after they were blanked 13-0 a day earlier at Houston, sending San Francisco to its ninth straight home defeat. That's the longest in San Francisco history and worst since the franchise's 11-game skid at New York's Polo Grounds from Sept. 11-19, 1940.

The Mariners added on in the fifth on a fielding blunder when second baseman Joe Panik scurried backward and tried to catch Austin Jackson's popup in shallow center but missed the ball. It didn't appear center fielder Angel Pagan called him off, while right fielder Jarrett Parker also hustled to the play.

Jackson singled home an insurance run in the ninth.

"Listen, it's been an adventure at times for us on the bases," McClendon said. "We have to have the ability to add on. That's what keeps teams at bay. When we have a lead and add on, it quiets their spirit a little bit."

The teams played once previously at AT&T Park, during the ballpark's opening season in 2000 when Seattle took two of three from June 9-11 that year. It was 58 degrees for first pitch this time in mid-June, pretty typical for a San Francisco summer.

Seattle's leadoff hitter reached on a single in four of the first six innings against Hudson (4-6), who allowed eight hits and three runs in five innings.

"We need more of that," Morrison said of aggressive baserunning.

Hudson, receiving one or zero runs of support for the eighth time in 13 starts, lost his 23rd career interleague game to match Derek Lowe and Barry Zito for most all time.

Nori Aoki hit an infield single in the second for the Giants' lone run after Seattle went ahead in the first on Nelson Cruz's grounder.

The Giants have been outscored 45-17 during their home skid. They lost against the American League at home for only the third time in 14 regular-season games since the beginning of 2014.

"You get in a skid like this, sometimes they do press," manager Bruce Bochy said. "Why at home? That is hard to explain. ... We just can't generate anything."

San Francisco's Angel Pagan snapped an 0-for-19 hitless stretch with his first-inning single.

Giants shortstop Brandon Crawford made a trio of snazzy plays in a 1-2-3 seventh. He made a diving stop on Morrison's grounder, then another nice throw on a groundball by Jackson before catching Robinson Cano's hard liner.

Mariners: LF Mark Trumbo was receiving treatment for his back spasms after they forced him to be a late scratch from Sunday's game. ... RHP Hisashi Iwakuma threw a three-inning simulated game at Safeco Field and is set to start for Class-A Everett on Saturday. He also will join Triple-A Tacoma before rejoining the Mariners from a stint with a strained lat muscle. ... LHP James Paxton, on the DL since May 29 with a strained left middle finger, is set to begin playing catch next week.

Giants: OF Gregor Blanco hasn't experienced any dizziness since Sunday morning and was riding the stationary bike again Monday as he recovers from a concussion. He is eligible to come off the seven-day list Tuesday, but it likely will be more like Wednesday or Thursday. ... RHP Matt Cain (elbow) struck out seven, walked two and allowed three earned runs on six hits in 3 1-3 innings in his rehab start for Triple-A Sacramento. ... RHP Jake Peavy (lower back) will start for Sacramento on Tuesday.

Mariners: LHP J.A. Happ (3-2) looks to bounce back from the shortest start of his career at 2 1/3 innings at Cleveland on June 11.

Giants: Tim Lincecum (6-3) will face his hometown team in the afternoon finale before the clubs shift to Seattle for two games.