481,000 preparing to lose power in Bay Area this weekend

Forecasters say the winds this weekend could be the strongest of the year. If that holds true, it could set firefighters, working to stomp out the flames in Sonoma County way back. KTVU has team coverage of the possible planned outages and how residents are coping. 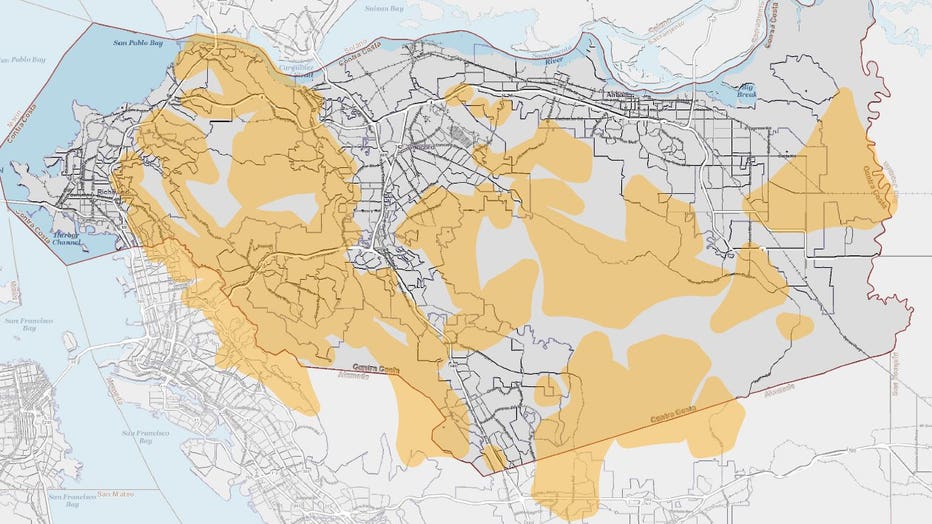 Another round of Pacific Gas and Electric power shutoffs is expected to to plague a widespread part of the Bay Area region this weekend due to extreme windy weather conditions.

As many as two million people could be affected.

A Fire Weather Watch will go into effect from Saturday night through Monday morning, according to the National Weather Service.

Meteorologists predict this weekend’s upcoming wind event will be more widespread than the one that struck mid-week and ended Thursday. The strongest winds are expected early Sunday morning.

The weather service says this could be the strongest wind event this year and since the 2017 wine country fires.

At a Thursday evening news conference, PG&E concurred it could be the strongest offshore wind event this season. Forty to 60 mile per hour winds are likely with gusts of up to 70 to 80 mph gusts.

According to PG&E, complete power restoration from a public safety power shutoff may take several days.

Given the weather outlook, PG&E said the planned outages would be similar to the one on Oct. 9, but for longer.

Customers who lost power Wednesday may have their service back on just temporarily before the next potential shutoff begins. PG&E began notifying 850,000 customers in the Sierra Foothills, North Bay, Peninsula, Central Coast, East Bay and Humboldt.

The town of Danville sent out an alert that said PG&E had notified them that the power shutoffs would occur, from 10 p.m. Saturday and will conclude at 2 p.m. Monday. As many as 1,300 homes and or businesses within the Danville town limits are expected to be affected.

Moraga, Orinda and Lafayette will shut down power Saturday at 10 p.m. if the current weather conditions do not change. They advise it could happen earlier if weather patterns change. This will affect approximately 5,159 PG&E customers in Moraga (nearly 21,000 in Lamorinda, according to Moraga police.)

PG&E has alerted the City of Lafayette that the power shutoffs could occur this weekend.

And in Alameda County, 57,000 customers would be affected.

PG&E has notified county officials they will experience another power shutoff starting Saturday from 5 p.m. to Monday at 2 p.m.

Pleasant Hill has been notified that they will monitor the situation and expect a power shutoff this Saturday.

In Sonoma County, the Santa Rosa Fire Department said on Friday that the timing for their potential shutoff begins Saturday starting as early as 1 p.m. and would go through Monday.

Novato in Marin County is preparing for their outage on Saturday afternoon, police said. Most areas of that city will be affected.

"We strongly advise all residents to be prepared, stay calm and obtain all necessary items that will ensure everyone's safety," McCaffrey said.

The College of Marin will close its Kentfield and Indian Valley (Novato) campuses at 9 p.m. Friday in anticipation of thes shutoffs. All classes on Saturday have been canceled, district officials said. Campuses will remain closed until the day after power is restored.

City officials in San Jose said 27,000 customers in Santa Clara County could be impacted primarily in the Alum Rock, Evergreen and Almaden areas.

“The frequency is annoying that's certainly true but it also gives us a chance to hone our skills in the emergency operations center,” said Riordan.

As fire danger remains high, firefighters throughout Northern California are staffing up this weekend in case a fire breaks out.

Further south, San Benito County will experience an outage beginning at 10 p.m. on Saturday through Monday, October 28 at 2 p.m.

Meanwhile the Red Flag Warning associated with the Kincade fire expired at 4 p.m. on Thursday.

Those who have lived in the Bay Area long enough know that warm winds swirling through the Oakland Hills can be an ominous sign.

Glen Henteges watches wildfire sweep through an area in 1991.

"I lived down on Grand at the time-- did not have to evacuate at the time, but we were ready to go," said Henteges.

He expects PG&E to shutdown the power in his neighborhood.

"Just be prepared. I expect PG&E to shut it down again 'cause it's more wind today than it was last week when they shut us down," he said.

If the poewr company does cut electricity, it won't be without controversy.

Businesses in the Montclair District remember wat the area looked like just over two weeks ago, the last time PG&E cut the power.

"When the power was out, this looked like a ghosttown," said DiAndre Norwood from Glamour Paws.

At the Montclair Barber Shop, Art McConnell said the last time the power was off, customers simply stopped coming.

"Yeah, yeah it was totally dark throught here. We lost a day of work," said McConnell.

He said he'd be willing to work by flashlight, but electricty allows this barbershop to work much better.

"Well, we could still do work with scissors, but there's a lot of clippers and the biggest thing is light. We need the light to be able to see what we're doing," said McConnell. "Obviously."