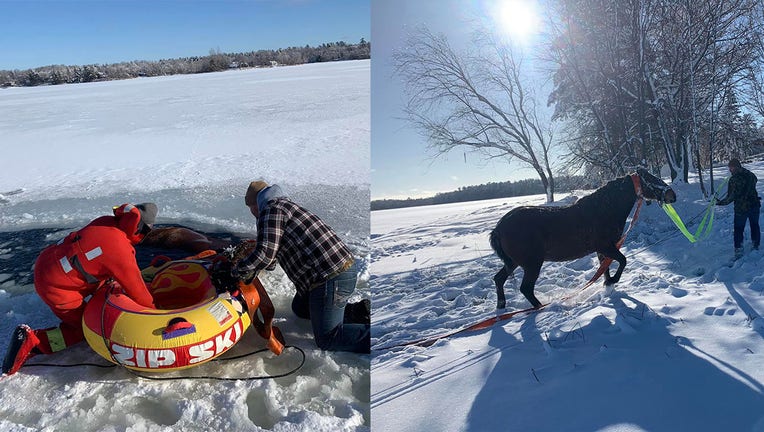 If you saw a horse fallen through ice in the middle of a lake, what would you do to save it?

GRANTSBURG, Wis. (FOX 9) - Year after year humans are warned about the perils of falling through thin ice on seemingly frozen lakes, but not all species get the memo equally.

On Sunday morning, bystanders in Grantsburg, Wisconsin, saved a horse after it had fallen through the ice on Wood Lake – putting their own lives in danger to save the animal.

After being sent a text at 8:30 a.m. that a horse – a mustang gelding to be exact – had fallen through thin ice in roughly 20 feet of water, Grantsburg resident D.J. Ryan and friends wasted no time springing to action.

"We analyzed the situation and could see him out there struggling. It was heart-wrenching to watch, ya know?" Ryan told FOX 9. "We knew it was deep water and not very good ice."

At an estimated 150 yards from shore, Ryan and friends went to work creating a rope and pulley system, using a life jacket under its belly and a stick for buoyancy.

An inner tube was used for both human safety, and to keep the horse’s head supported. But with its head supported, it began to lose consciousness, according to Ryan.

With the clock ticking, after numerous unsuccessful attempts to get him out of the water, a longer strap was used to create a sling, and a dozen people on shore attempted to pull the other end of the rope in unison. But again, they failed.

"He did a thrash kick toward the end when we thought he was near giving up, and got himself kind of halfway up," Ryan explained about the rescue that was now nearing four hours long. "We yelled ‘1-2-3! We need to go’ and that’s when we got him on the ice. We kept him down at first, because if he stood up potentially all three of us were going in the water with him."

Rescuers kept tension on the horse, while drying it with blankets and keeping its eyes covered to remain calm. With about 25 feet to shore, he was able to stand and walk to land – surrounded by people drying him with blankets.

With a mother who was a veterinarian, and a childhood around horses in 4H, Ryan is humble about the rescue, simply saying it was, "the right thing to do."

"There wasn’t a lot of questions asked," Ryan said. "It’s just what you do. We knew the risks; we've been on this ice our whole lives."

According to Ryan, the venture was truly an "all hands on deck" effort, with Spencer Wicklund helping locate the horse, Rachel Trittelwitz and Karl Anderson helping line up tow vehicles, Joel Glover helping with the transfer to a heated stable, Grace and Jesse Swanson helping with recovery once the horse was on land and Kate and Rick Quimby helping in all stages from the beginning.

Officer Kayla Woody with the Grantsburg Police Department and Chris Spaight with the Wisconsin Department of Natural Resources (DNR) also helped with recovery while keeping the safety of those involved in mind, according to Ryan.

"They were trying to do their job, keep us safe, and make sure we didn’t fall through too – which we really didn’t care about at the moment," Ryan said. "In rural areas a neighborhood goes 10 miles. Everyone helped out. It was a solid group effort."

FOX 9 can confirm the horse has been returned to its owner, and is in stable condition.