NEW ORLEANS - Ida, a powerful hurricane that left people trapped in floodwaters and caused "catastrophic" damage to the power grid, was downgraded to a tropical storm Monday as it continued its path through the South.

Rescuers set out in hundreds of boats and helicopters to reach people trapped by floodwaters, while utility crews mobilized to fix a large swath of the state's electrical grid shattered in the storm.

Ida made landfall on Sunday, the same day 16 years earlier that Hurricane Katrina ravaged Louisiana and Mississippi, and its 150 mph winds tied it for the fifth-strongest hurricane to ever hit the mainland. It was blamed for at least one death — someone hit by a falling tree outside Baton Rouge. But with many roads impassable and cellphone service knocked out in places, the full extent of its fury was still coming into focus.

Christina Stephens, a spokesperson for Gov. John Bel Edwards, said that given the level of destruction, "We’re going to have many more confirmed fatalities."

The governor's office said damage to the power grid appeared "catastrophic." And officials warned it could be weeks before power is fully restored.

"For the most part, all of our levees performed extremely well -- especially the federal levees -- but at the end of the day, the storm surge, the rain, the wind all had devastating impacts," Edwards said. "We have tremendous damage to homes and to businesses." 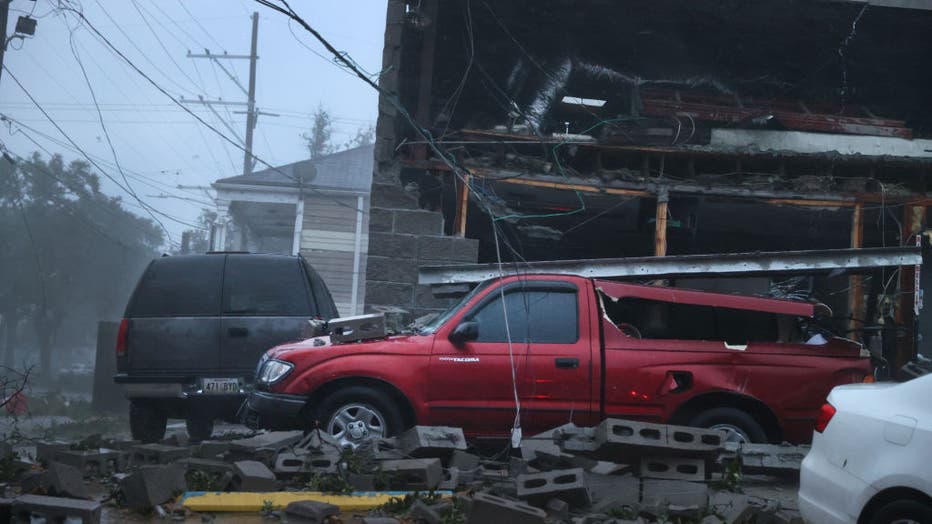 NEW ORLEANS, LOUISIANA - AUGUST 29: Vehicles are damaged after the front of a building collapsed during Hurricane Ida on August 29, 2021, in New Orleans, Louisiana. (Photo by Scott Olson/Getty Images)

All of New Orleans lost power around sunset on Sunday as the hurricane blew ashore, heightening the city’s vulnerability to flooding and leaving hundreds of thousands of people without air conditioning and refrigeration in the summer heat.

Overall, more than 1 million customers in Louisiana were without power, and another 80,000 or so in Mississippi were in the dark, according to PowerOutage.US, which tracks outages nationwide. Highs in some areas were forecast in the mid-80s on Monday, climbing to nearly 90 by Wednesday.

The rain and surge prompted widespread flooding, creating a maze of rivers and bayous south of New Orleans and threatened hundreds of homes. On social media, people posted their addresses and directed search and rescue teams to their attics or rooftops.

Rescuers moved to launch hundreds of boats into the floodwaters on Monday morning. The Louisiana National Guard said it activated 4,900 Guard personnel and lined up 195 high-water vehicles, 73 rescue boats and 34 helicopters. Local and state agencies were adding hundreds of more.

Four Louisiana hospitals were damaged and 39 medical facilities were operating on generator power, the Federal Emergency Management Agency said. Officials said they were evacuating scores of patients to other cities.

The governor's office said over 2,200 evacuees were staying in 41 shelters as of Monday morning, a number expected to rise as people were rescued or escaped from flooded homes. Stephens said the state will work to move people to hotels as soon as possible so that they can keep their distance from one another.

The region has already been reeling from a resurgence of COVID-19 infections due to low vaccination rates and the highly contagious delta variant.

"This is a COVID nightmare," she said, adding: "We do anticipate that we could see some COVID spikes related to this."

Hurricane Ida made landfall in Louisiana on August 29 as a category 4 storm, with maximum sustained winds of 150 mph, the National Hurricane Center reported.(Credit: Paulette Ristine via Storyful)

New Orleans' levees underwent major improvements after Katrina, which in 2015 breached the city's flood defenses, caused catastrophic flooding and was blamed for 1,500 deaths. Ida posed its biggest test since that disaster.

When daylight came, streets were littered with tree branches and some roads were blocked. While it was still early, there were no immediate reports of the catastrophic flooding city officials had feared.

The hurricane twisted and collapsed a giant tower that carries key transmission lines over the Mississippi River to the New Orleans area, causing widespread outages, Entergy and local authorities said. The power company said more than 2,000 miles of transmission lines were out of service, along with 216 substations.

The storm also flattened utility poles and brought trees down onto power lines.

AT&T's phone system was down all across southeastern Louisiana. Many people resorted to using walkie-talkies. The governor's office staff had no working phones.

Life-threatening flash flooding amid heavy rain, as well as damaging winds and dangerous storm surge, all continued to be a threat for portions of Louisiana and Mississippi. The storm was forecast to dump as much as two feet in places as Ida’s center moved over Mississippi.

Ida’s winds were down to 45 mph early Monday, according to the National Hurricane Center. Forecasters said it would rapidly weaken while still dumping heavy rain over the region.

Ida was expected to pick up speed Monday night before dumping rain on the Tennessee and Ohio River valleys Tuesday, the Appalachian mountain region Wednesday and the nation’s capital on Thursday.

Forecasters said flash flooding and mudslides are possible along Ida’s path before it blows out to sea over New England on Friday.