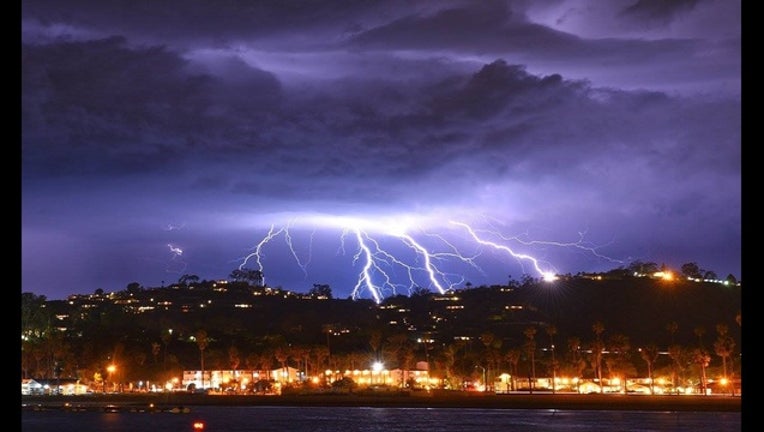 LOS ANGELES (AP) - A downpour rolled into California with spectacular lightning and thunderclaps Tuesday night in one of the most electric storm systems of the winter.

"Every which way you look there is lightning," TV reporter Tracy Lehr said as bolts repeatedly lit up the sky around her while broadcasting live on Fox11 in Santa Barbara late Tuesday.

The storm was the latest atmospheric river to flow into California this winter. The National Weather Service reported "copious" lightning strikes as the long plume of Pacific moisture approached the coast on Tuesday.

By night, the sky over Southern California was streaked with bolts as thunder banged and rattled across the region. The weather service said it was "one of the more electrically active systems" seen all winter.

"It was just thrilling. We were amazed," said Jennifer Kennedy of Santa Monica, who was driving with her son near Los Angeles International Airport when the skies opened up.

"We started to see some really huge lightning strikes out over the water," she said. "We wondered if it would affect flight operations at the airport."

Delta Air Lines Flight 2432 returned to LAX "out of an abundance of caution" after encountering lightning Tuesday, the airline said. The 110 passengers were put aboard another flight to Seattle, a statement said, noting that airliners are designed to withstand lightning.

Santa Barbara County authorities were able to lift evacuation orders early Wednesday for an estimated 3,000 residents of communities below hills and mountains scarred by several recent wildfires, including parts of Montecito where a debris flow in January 2018 ravaged neighborhoods and killed more than 20 people.

The evacuation orders had gone into effect Tuesday due to forecasts of as much as 5 inches (12.7 centimeters) of rain at higher elevations.

The California Highway Patrol reported numerous incidents of roadway flooding in the mountains northeast of Bakersfield and in areas of the San Joaquin Valley, as well as in the Owens Valley at the foot of the Eastern Sierra and in Death Valley National Park.

With just two weeks left in the season, California is flush with water and a vital snowpack that's significantly above normal, and drought and abnormal dryness have been pushed to the fringes of the state.

With showers still occurring Wednesday and more rain in the near- and long-term forecasts, downtown Los Angeles was nearing 17 inches (43.1 centimeters) of rain so far this season. That's more than 5 inches (12.7 centimeters) above normal.

Snow continued to fall in the Sierra Nevada, where winter storm warnings were to remain in effect for high elevations until early Thursday. The Mammoth Mountain ski resort reported more than 51 feet (15.5 meters) of snow on its summit so far this season.