PINOLE, Calif. - An incarcerated firefighter who battled a California blaze is now in an Immigration and Customs Enforcement custody awaiting likely deportation to Laos, a country his family fled three decades ago.

And until then, the fate of Bounchan Keola, 39, who grew up in Richmond, Calif., is in the hands of Gov. Gavin Newsom. He has asked for a pardon from his prison sentence, showing that he has changed for the better and that his service to the state battling wildfires should count for something.

"He made a mistake as a child. He came here impoverished and he was resettled as a refugee when he was 6," said his San Francisco Asian Law Caucus attorney, Anoop Prasad. "And he literally risked his life. California didn't have to call ICE to deport him...This case is extremely sad and unfortunate. Society has failed him again and again."

Keola had exactly 14 days left in his prison term when he was crushed by a tree while battling the Zogg Fire in Shasta County on Oct. 2.

Seven days later, the California Department of Corrections and Rehabilitation notified ICE that his release would be coming up. On Oct. 16, the day Keola finished serving his prison sentence in Sacramento, ICE came to pick him up. On Oct. 29, an immigration judge ordered his removal to Laos, records show.

Keola is now in an ICE detention facility in Kern County. He has an interview on Dec. 22 with the Laotian Consulate, but Laos does not have a repatriation agreement with the United States, which could mean that he ends up staying in California. His fate is unclear. And only a pardon from Newsom, his attorneys said, would expunge his record and allow him to go home freely to his parents and sister in Pinole. 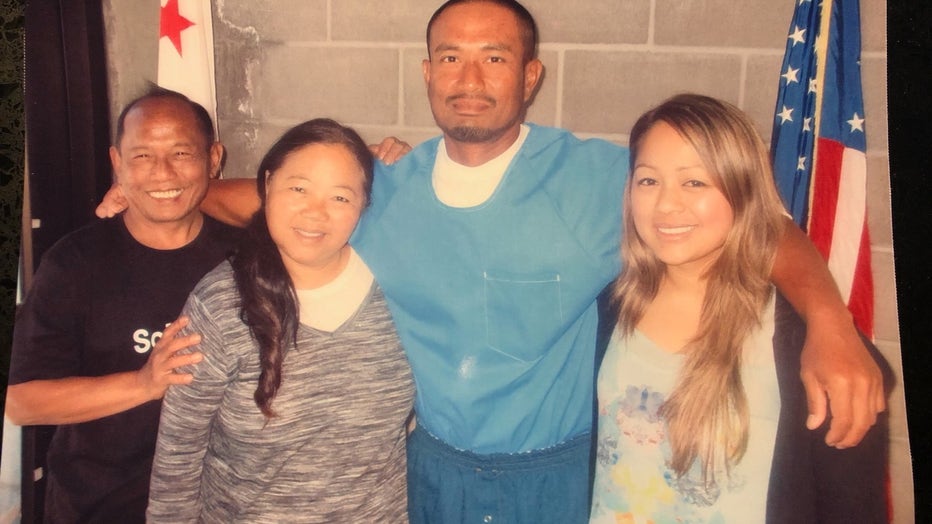 Bounchan Keola is with his parents. Their family fled Laos more than 30 years ago.

“I just want to go home and give my mom and dad a hug,” Keola told The Guardian, the first news organization to report the story. “All I know is I’m American. I’ve never thought of myself not being a citizen. I’m just asking for that one, second chance.”

His sister, Thong, told KTVU on Friday that her heart is heavy and she and her parents are praying for some good news.

California is a sanctuary state, which forbids most cooperation with ICE. However, there are exceptions when a person is a convicted violent offender, which Keola is considered in this case. On top of that, under SB 54, California’s Sanctuary State law, CDCR is exempt from this law, which is a point of contention for many lawmakers.

In July, Assemblymember Rob Bonta (D-Oakland) and colleagues sent a letter to Gov. Gavin Newsom calling for an end to transfers of Californians from prison and jails into ICE custody.

"Based on his criminal convictions, Keola is an aggravated felon who is subject to removal and mandatory ICE detention," ICE spokesman Jonathan Moore said in an email.

In a statement, CDCR spokeswoman Dana Simas said that the prison system "does not determine the immigration status of inmates in state custody. Pursuant to state law, CDCR collects available information about an inmate during reception center processing when the inmate is placed in CDCR’s custody after adjudication. ICE makes the determination of whether to put a hold or detainer on the inmate and is responsible for forwarding the hold or detainer to CDCR."

Newsom's spokesperson, Jesse Melgar, said in an email: "We are unable to discuss individual clemency applications, but can assure that each application receives careful and individualized consideration."

Keola's background demands that consideration, his lawyer pointed out.

Prasad notes that after Keola's father fought in the Vietnam War on the side of the United States, the family feared for their lives and left Laos when Keola was 2. The family obtained refugee status, but they remained poor and they weren't given much help from the government.

Keola told the Guardian he was "relentlessly bullied for being Asian." He found some friends in nearby Richmond, but that led him to start drinking in middle school. He joined a gang.

When he was 16, he was riding in a car with friends and he and a friend began shooting out of the car, his lawyer said. He has said he was afraid they were being chased by a member of a rival gang. Two people got shot. One of them died.

Keola was prosecuted as an adult. He agreed to plea to second-degree attempted murder. He was sentenced to 28 years.

"He has shown extreme remorse for the decisions he made," Prasad said. "We need to leave room for redemption."

He got a chance to give back to the community this fall when he became one of the thousands of incarcerated inmates battling the state's wildfires this season. In fact, he received a shorter prison sentence because of the extra credit he earned for fighting fires.

Incarcerated firefighters get two days credit off their sentence for every day they’re working and are paid up to $5 a day. It’s estimated they save the state tens of millions of dollars a year.

But then Keola got injured.

While he was stationed in Redding, Calif., a tree fell on him while he was clearing brush to stop the fire from spreading. He is still in excruciating pain, his lawyer said, and he has not received the proper medical attention.

To the public, Newsom has tried to come off as a champion of those who have been incarcerated and fought on the front lines to save California during the wildfire season.

On Sept. 11,  Newsom signed AB 2147, a bill that will allow formerly incarcerated people to be able to try to expunge their records and become professional firefighters. Those convicted of sex offenses and violent felonies would not be eligible.

Formerly incarcerated people would also have to bring their cases to court and have a judge agree to set aside their conviction.  This also only applies to those who have already completed the prison firefighting program.

"Inmates who have stood on the frontlines, battling historic fires should not be denied the right to later become a professional firefighter," Newsom later said in a tweet after signing the bill.

Despite what Keola has been through and the legal hurdles he faces, Prasad said he is "hopeful" that Newsom will pardon his client and change the state's overall policy of allowing the prison system to cooperate with ICE.

Keola isn't the first firefighting inmate to be in this situation. Prasad said he knows "many, many" similar situations, including the story of Kao Saelee, who worked as an incarcerated firefighter and was also ordered to be deported upon his release.

The CDCR's participation "is completely optional," Prasad said. Newsom, he added, could change everything "with the stroke of a pen."

Keola's record, according to his lawyer, could apply to be expunged, if he weren't facing deportation.

"He served California as a firefighter," Prasad said. "He literally risked his life. California didn't have to call ICE. He's already served his time. He could be home with his family."