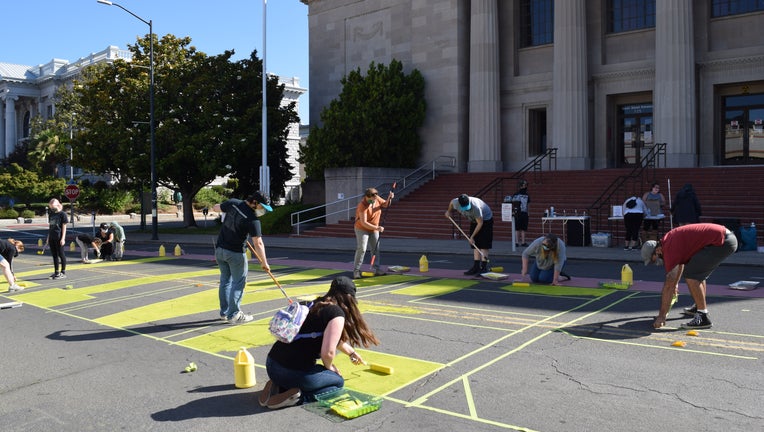 MARTINEZ, Calif. - After a Black Lives Matter street mural in downtown Martinez was defaced, police expect several thousand protesters to participate in a protest on Sunday, now that several groups, including one with a national profile, are involved.

Martinez Police Chief Manjit Sappal said he expects a large crowd based on those at other protests led by Richmond-based Together We Stand, which is also known as TWS Revolution.

Two other groups, the Southern Alameda County Resistance Network and the local group Martizians for Black Lives, are also expected to take part in Sunday's protest.

"While they appear to be a peaceful group, we have intelligence
that counterprotesters will show up to protest against protesters'" Sappal said in an email on Wednesday. "It is during these instances that confrontations can escalate and create public safety challenges."

Nakenya Allen didn't have anything large in mind when she
contacted Sevgi Fernandez, the founder of TWS Revolution, about leading a Martinez protest after the discovery on June 28 of two "white power" fliers on a residential street near downtown and her home.

"Something inside me said, 'No, we definitely need to call that
out,'" she said.

Allen, who is Black, said she has lived in Martinez for 12 years
and hasn't experienced prejudice locally herself but knows others who have. She said she knows Fernandez through a moms club and doesn't consider herself an activist.

The city-permitted Black Lives Matter street mural hadn't yet been
created - or vandalized. It was painted on Court Street downtown on July 4 and was defaced before the paint had fully dried.

A woman took a roller and black paint to it in the presence of
several BLM supporters, saying Black Lives Matter "is not happening in my town." A man with her was shouting statements including "Racism is a leftist lie."

Videos of the pair went viral, and both now face misdemeanor hate crime and vandalism charges.

Other opponents of the Black Lives Matter movement in Martinez
also have been bold. The next evening, July 5, a 30-year-old Martinez man was arrested for allegedly brandishing a loaded revolver during an argument with a defender of the mural. And on Tuesday, someone painted the words "White Lives Matter" across Howe Road in Martinez (those letters were soon covered
up).

Sappal said he asked TWS Revolution to postpone Sunday's protest, given the recent conflict. Fernandez said that isn't an option.

"We feel strongly that it would be sending the wrong message if we were to give people like that the power to stop our voices from being heard," she said.

Justin Gomez, lead facilitator of Martizians for Black Lives, also
wants to proceed with the protest. He hopes it remains peaceful - and leaves an impression. Waiting, Gomez said, would only serve to validate racist actions.

"Anytime racism rears its ugly head, people have to show up and
react," said Gomez, who joined Fernandez in saying they're imploring protesters not to engage with counterprotesters if at all possible.

Sappal said his department is "making arrangements to have
sufficient staff on duty to deal with any issues" but plans for officers to keep a low profile. He recommended that the Martinez Farmers' Market not open for business on Sunday, and market officials said Wednesday that the market will be closed and will return on July 19.

Police are not requiring downtown businesses to close or board up, but Sappal recommends owners "take whatever action they feel necessary to ensure their businesses are protected."

Kara Kotchman, the director of the nonprofit Main Street Martinez,
said a group of downtown business owners plans to meet via Zoom on Thursday to discuss how they'll prepare.

"Main Street will be sitting in on the meeting to hear businesses'
concerns and is encouraging each (merchant) to make their own decision as to boarding up and or closing for the day," Kotchman said.

Allen said Wednesday that she envisioned a relatively small
protest when she first sought TWS's help, before Martinez made the national news. Obviously, she said, things have changed.

"To me, the more the merrier," Allen said. "It says we have people
on our side."