An elderly woman with dementia gets help every week from a sanitation worker with a heart of gold.

INDEPENDENCE, Mo. - Caring for an aging parent can be stressful, but a small gesture by a sanitation worker in Missouri left the family of an elderly woman forever grateful for his continuing act of kindness.

Opal Zucca, 88, fell while trying to bring the trash can back up her driveway in January and was injured, according to her daughter, Colette Kingston.

Kingston said her mother suffers from dementia, and the family installed a Ring camera at Zucca’s home so they could keep an eye on her movements.

A Waste Management worker was there the day Zucca fell and has brought the can back up her driveway every week since, Kingston said. 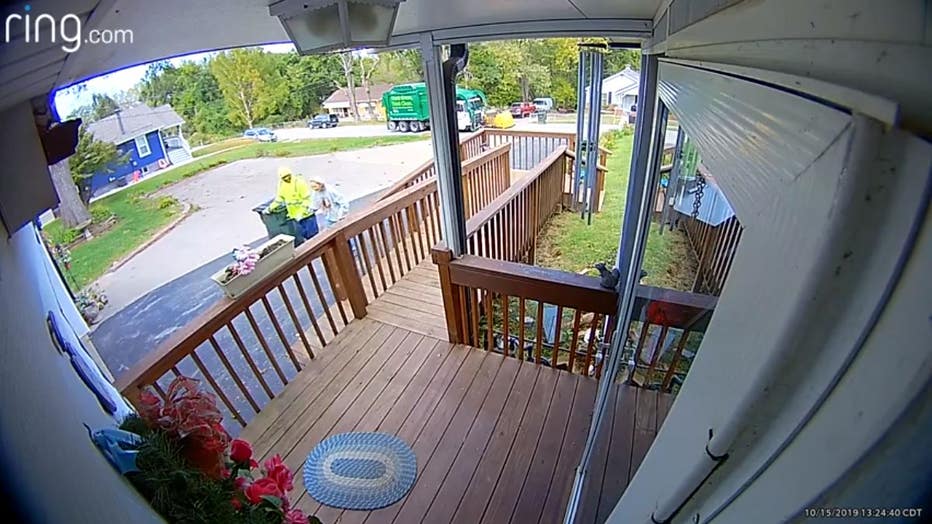 Zucca’s daughter posted Ring footage on Facebook of the man, bringing the can back up and walking arm in arm with the elderly woman while making conversation.

“It’s good to see you,” the worker can be heard saying in the video. “God bless you as always, darling. Looking good, I like that hair.”

Kingston said caring for a parent takes a village, and the small gesture provided an “enormous relief” for their family.

"It can be difficult caring for an aging parent and making sure they are taken care of when they want to stay in their own home,” she said.

In the Facebook post, the Zucca family thanked the unnamed worker for demonstrating “such care” for their elderly mother.

"When I saw the video it brought tears to my eyes,” Kingston added.