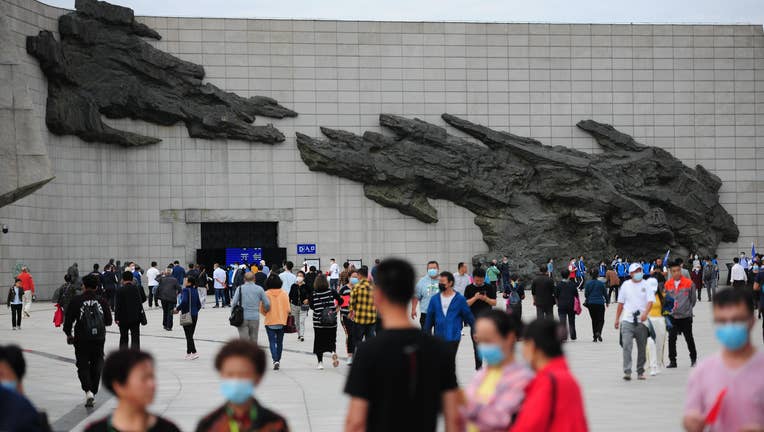 SHENYANG, CHINA - SEPTEMBER 18: People wearing face masks visit the September 18th History Museum to commemorate the 89th anniversary of the 'September 18 incident', which marked Japan's full-scale invasion of China and the beginning of the 14 years

TOKYO - New Japanese Prime Minister Yoshihide Suga said he and Chinese President Xi Jinping agreed in talks Friday to work closely together by holding high-level meetings including summits, but did not discuss the possibility of a visit by Xi to Japan.

"I told (Xi) that the stability of Japan-China relations is crucial, not only for the two countries but also for the region and for international society," Suga told reporters after their phone conversation.

His talks with Xi late Friday were his first since taking office just over a week ago, replacing Shinzo Abe, who resigned due to poor health.

A planned visit by Xi to Japan last April was indefinitely postponed because of the coronavirus pandemic. The plan had triggered protests even within Japan's governing party because of China's tightening of controls over Hong Kong and its assertive actions in regional seas.

"We did not discuss (Xi's) possible visit to Japan," Suga said.

However, the leaders agreed to hold summits and other high-level meetings to cooperate in bilateral, regional and international issues, he said.

Relations between the two Asian rivals have improved recently as China faces heightened tensions with the United States.

China's official Xinhua News Agency said that Xi noted the improvement in relations and said that China stands ready to work with the Suga government to deepen cooperation in mutually beneficial areas such as trade and to handle sensitive issues, including historical ones.

Japan's military invasion of China in the 1930s and 1940s remains a sore spot between the two.