ATLANTA - Former President Jimmy Carter had another fall at his home in Plains, Georgia, fracturing his pelvis and going to the hospital for treatment and observation, a spokeswoman said Tuesday.

Carter Center spokeswoman Deanna Congileo described the fracture as minor. Her statement said that the 95-year-old was in good spirits at the Phoebe Sumter Medical Center after falling on Monday evening, and that he was looking forward to recovering at home.

This is the third time Carter has fallen in recent months. He first fell in the spring and required hip replacement surgery. Carter fell again this month and despite receiving 14 stitches, traveled the next day to Nashville, Tennessee to rally volunteers and help build a Habitat for Humanity home. 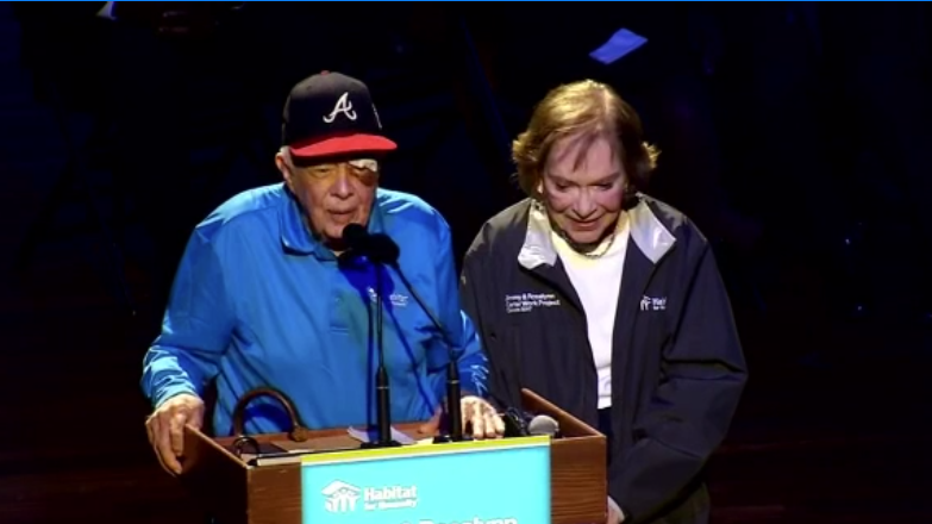 Carter is the oldest living former president in U.S. history. He and 92-year-old Rosalynn recently became the longest married first couple, surpassing George and Barbara Bush, with more than 73 years of marriage.

The 39th president survived a dire cancer diagnosis in 2015, and last month, he matter-of-factly told an audience that they might be hearing his last annual Carter Center address. But even then, he was forward-thinking, expressing hopes that the center will become a more forceful advocate against armed conflicts, including "wars by the United States."

"I just want to keep the whole world at peace," Carter said.