A judge has ruled that California must stop denying applications for COVID-19 rent relief money, amid a lawsuit filed by tenants’ advocates, who argue the state has unfairly withheld money from low-income renters.

OAKLAND, Calif. - A judge has ruled the California Department of Housing and Community Development must stop denying applications for COVID-19 rent relief money, amid a lawsuit filed by tenants’ advocates, who argue the state has unfairly withheld money from low-income renters.

Tenant advocate groups sued the state alleging it wrongly denied tens of thousands of applications, failed to provide adequate reason or explanation for denials, and did not provide a proper appeals process.

Alameda County Superior Court Judge Frank Roesch ordered all application denials immediately stop, and any rejected applications issued in the last 30 days be put on hold. Roesch indicated the court will review the rental assistance program, its practices and its appeals process.

"This really suggests that the state is denying people who should be getting rental assistance," said Attorney Madeline Howard with Western Center on Law and Poverty, that sued the state. "They need to fix that."

It may be an opportunity, according to advocates for tenants who have been denied or are left waiting to see state rent relief funds. While the program ended in March, data shows tens of thousands are still waiting for application approval or checks.

KTVU reported in late June that analyzed state data by nonprofit PolicyLink showed 85,900 households still waiting for applications to be reviewed and roughly 1-in-3 applications denied.

Many tenants have said they’re not sure why they’ve been denied, despite meeting the low-income requirement.

"Tenants will be told they were denied because their application is incomplete, but they think it’s complete. No one has explained to them what is incomplete about it," said Senior Attorney Jackie Zaneri with Alliance of Californians for Community Empowerment, which is representing tenants in the lawsuit. "Or they’re told their information can’t be verified, but they don’t know what that means, or how to explain whatever is being seen as an issue." 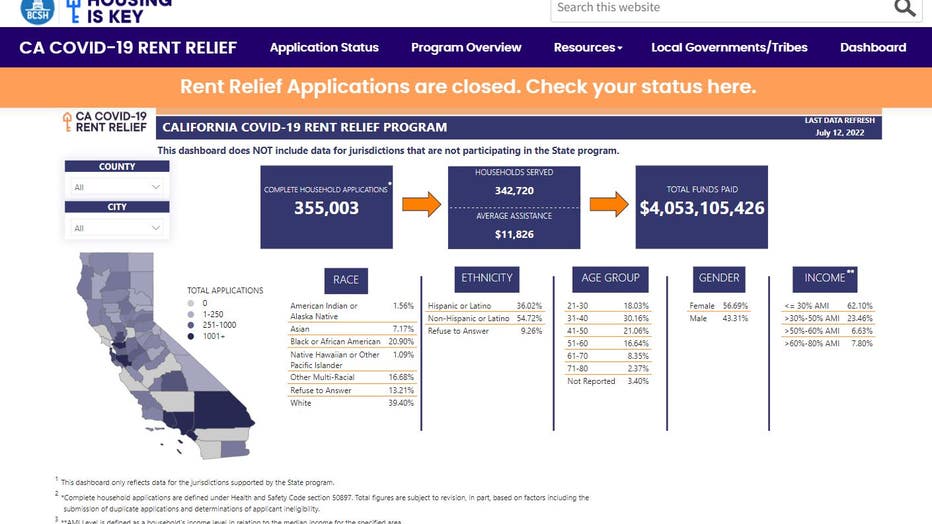 The Department of Housing and Community Development has touted its program, and has paid out more than $4 billion to struggling renters, according to its dashboard.

Currently, tenant advocates said they estimate 100,000 household have pending applications or were recently denied, and could be affected by the judge’s decision.

The state responded to KTVU’s request for comment in a statement that said it has helped more than 340,000 low-income households, keeping more than 700,000 Californians housed.

Still, advocates argue that with expired statewide eviction protections, there is risk of more people falling through the cracks or becoming homeless.