Why Juneteenth is a sacred day for African Americans

Juneteenth is the oldest known celebration of the end of slavery in the United States.

A year after Juneteenth became a federal holiday in the U.S., people gathered this weekend at events filled with music, food and fireworks. Celebrations also included an emphasis on learning about the past and addressing racial disparities.

June 19, 1865, was the day that Union soldiers arrived in Galveston, Texas, to order freedom for the enslaved Black people in the state. It was two months after the Confederacy had surrendered in the Civil War and about 2 1/2 years after the Emancipation Proclamation ended slavery in the Southern states.

RELATED: Juneteenth: The significance of the holiday and why it's celebrated and commemorated

This is the first year Juneteenth is being widely recognized as a federal holiday, which means many offices and businesses will be closed.

Here’s a look at what will be open and closed on Monday, June 20, 2022, since the holiday fell on a weekend:

Post offices will be closed on Monday, which means mail and packages won’t be delivered by the United States Postal Service. 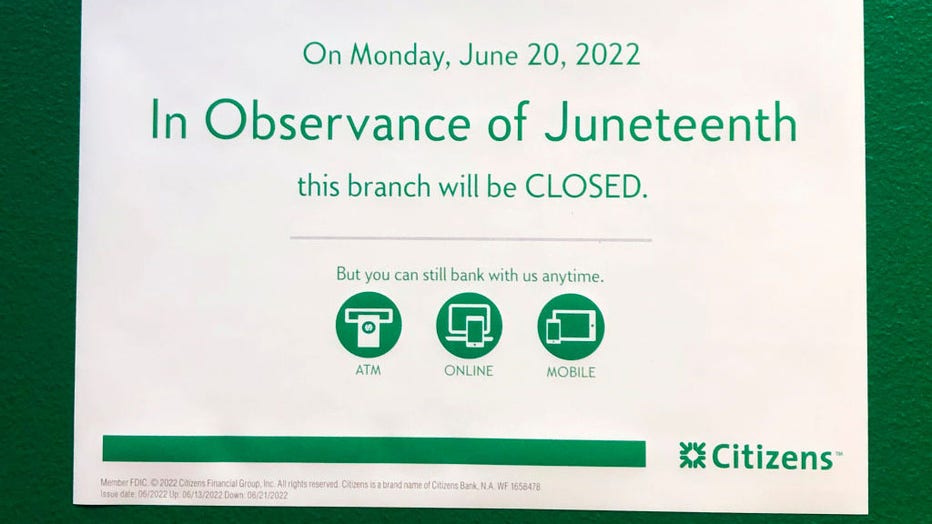 The Federal Reserve is observing Juneteenth on Monday, which means most banks will be closed.

Banks are not required to close on federal holidays, but many do. Check your local branch before visiting.

Additionally, the New York Stock Exchange and Nasdaq will be closed.

All federal offices and schools will be closed. However, at the state government level, some may still be open.

Lawmakers in Mississippi, South Carolina, Tennessee and elsewhere failed to advance proposals this year that would have closed state offices and given most of their public employees paid time off.

As with other major summer holidays, private retailers may choose to be open or closed, or amend their hours. Check with your destination Monday before visiting.

Corporate offices of major retailers, such as Target, Twitter and Nike, have given employees a paid day off on Juneteenth in the past.