A few miles up a private road in Geyserville is where an equipment malfunction occurred on a Pacific Gas and Electric transmission tower, just minutes before the Kincade Fire started.

Thousands of people were forced to evacuate their homes due to the Kincade Fire and many crowded into evacuation centers in Sonoma County. KTVU's Paul Chambers reports many there said these fires are the new normal.

GEYSERVILLE, Calif. (KTVU) - A few miles up a private road in Geyserville is where an equipment malfunction occurred on a Pacific Gas and Electric transmission tower, just minutes before the Kincade Fire started.

The utility said Thursday in a preliminary report submitted to the California Public Utilities Commission that when the fire ignited, transmission lines in the area were fully energized.

PG&E said weather conditions weren't severe enough to trigger a power shutoff on transmission lines. The cables carry energy generated from the power plant to the substation, but electricity was cut along those substations' distribution lines which power homes and businesses.

But perhaps not soon enough.

Residents in Geyserville said they had power until the early morning hours. 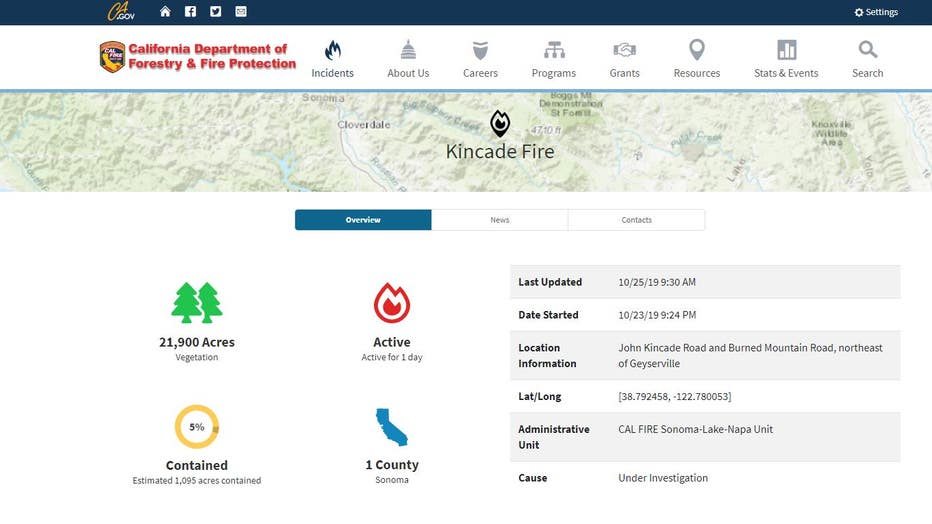 According to a recent update from Cal Fire, the Kincade Fire ignited around 9:24 p.m.

The electric company's CEO Bill Johnson said at a press conference Thursday that the cause of the fire has not been determined.

"We still don’t know what happened," he said.

The next morning PG&E learned of a broken jumper. That's the wire that dangles down and gives the line between towers a jolt of electricity. It's the same issue being scrutinized in the 2018 Camp Fire.

A report shows a similar situation with victims blaming the utility.

Johnson reiterated that the incident report filed with the CPUC does not mean the Kincade Fire sparked as a result of an issue on PG&E's transmission tower.

PG&E, Cal Fire investigators and other agencies are actively at the tower site. Records show the utility inspected the large transmission tower near Kincade Road earlier in the year as part of the wildfire safety inspection program. Still, it's unclear how or why the malfunction occurred.