Landscapers working on a project at an Atherton home discovered a car buried in the home's yard on Thursday, police say. Officials said the vehicle was possibly buried some time in the 1990s and was 4 to 5 feet underground. Cadaver dogs at the scene made slight indication of human remains though none have yet been found.

ATHERTON, Calif. - Landscapers working on a project at an Atherton mansion discovered a car buried in the yard on Thursday, police say.

The Mercedes-Benz convertible was possibly buried in the 1990s and was 4 to 6 feet underground, authorities said. It had been reported stolen to the Palo Alto police in 1992 and the owner of the car is believed to be dead now, said Atherton's mayor at a Friday press conference.

Cadaver dogs examining the discovery gave Thursday and again on Friday an indication that they possibly detected human remains.

The police commander said that they "picked up a slight hit."

No remains have been found since the inconclusive reaction by the dogs. 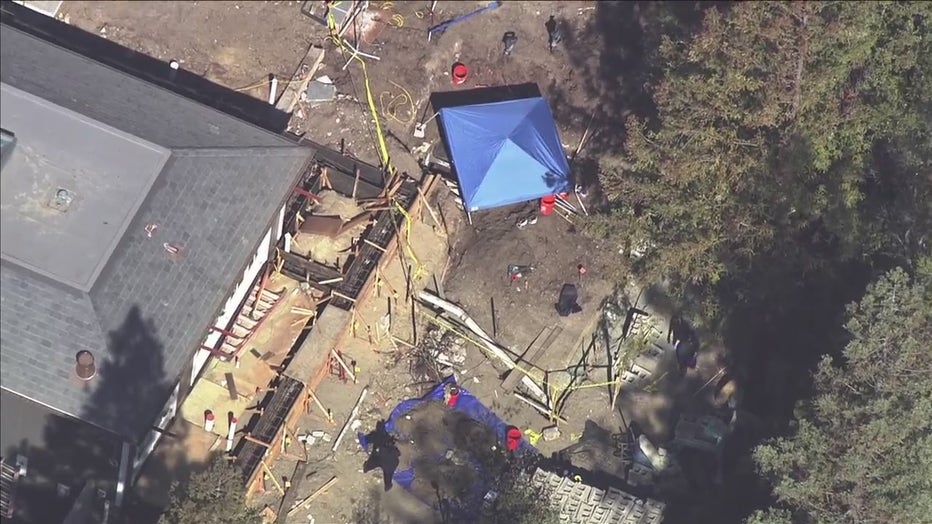 Cadaver dogs possibly detected a scent of human remains in a car that was unearthed by landscape workers in an Atherton yard.  (KTVU FOX 2)

Out of an abundance of caution, Larson said police called out the San Mateo County crime-scene lab to assist with the excavation of the vehicle. Since it was unclear why the car was buried, police said cadaver dogs were brought in to investigate while excavation continued.

Police said there were unused bags of concrete throughout the vehicle. The vehicle was buried before the current homeowner occupied the home.

The motive and circumstances around this incident are under investigation.