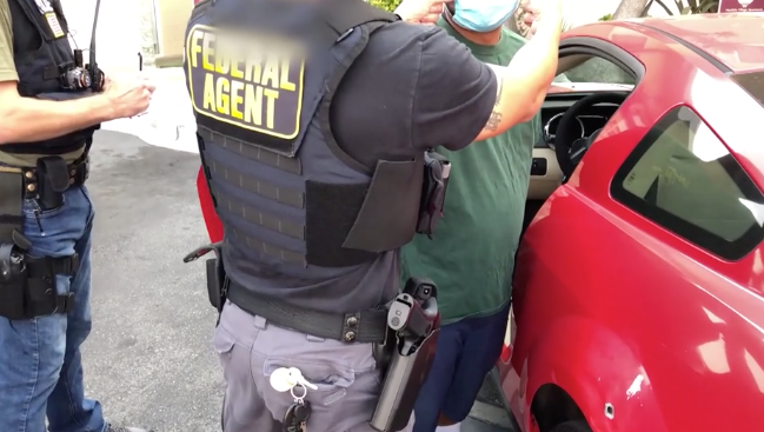 FILE ART -A federal agent arrests a man in Daly City on Sept. 28, 2020 as part of a sanctuary city operation. Courtesy: ICE

SAN FRANCISCO - A group of immigrant rights advocates and nearly 20 lawmakers are asking Gov. Gavin Newsom what California's plan is to vaccinate those detained in federal immigration detention facilities.

The groups said they have heard conflicting reports about who is ultimately responsible for the vaccination of the 1,200 ICE detainees in California: The federal government or the state?

"This is extremely frustrating for us," Hamid Yazdan Panah, advocacy director for the Immigrant Defense Advocates, said on Tuesday. "To pretend these people don't exist in your state and to continually pass the buck is extremely disturbing."

Some of the lawmakers who sent a letter to Newsom on Tuesday are from the Bay Area. They include legislators David Chiu, Dave Cortese and Buffy Wicks.

Last month, officials from Immigration and Customs Enforcement and the U.S. Department of Homeland Security announced that both federal agencies would leave it upp to states to decide when to vaccinate this population. There are 14,000 people in ICE detention across the country.

In a statement, ICE said it is "firmly committed to the health and welfare of all those in its custody." But the agency added that COVID-19 vaccines for detainees are being allocated by "local and state health departments," and were incorporated into the total vaccine amount distributed by the federal government to each state.

ICE spokesman Jonathan Moor said at this time, a "limited number" of ICE detainees have begun to receive the COVID-19 vaccine based on availability and priorities for vaccinating people in the states where they are being held. He was not specific on the number. If state and county public health departments order enough vaccine, Moor said that federal ICE officials will administer those doses.

Currently, in most states, however, the vaccine has not been distributed by the state and local health departments for ICE to provide to detainees. And the Department of Homeland Security did not receive any direct allocation of COVID-19 vaccine for detainees.

Anecdotally, advocates who represent detainees inside the Otay Mesa Detention Facility near San Diego, where Carlos Ernesto Escobar Mejía, 57, died of coronavirus in May, say some who are housed there have been vaccinated.

But why some detainees are getting vaccinated and others are not is still an outstanding question.

Yazdan Panah, the advocacy director for the Immigrant Defense Advocates, pointed out that if the federal government is not coordinating the vaccinations, California has the responsibility to pick up the slack.

Yazdan Panah said that reasoning rests on California's successful legal challenges against the Trump administration where the state won the right to oversee the health and safety of anyone, including those in immigration detention.

But according to the immigrant rights advocates, which include Centro Legal de la Raza, California Immigrant Policy Center, and NorCal Resist North Bay Rapid Response Network, "it is imperative that our state has a plan in place to vaccinate individuals in congregate settings and detention facilities - where 90 of the 100 largest COVID-19 cluster outbreaks have taken place."

The groups and the lawmakers want Newsom to clarify several issues including what, if any, communications have taken place between California and the federal government in terms of vaccinating those in ICE custody and what timeline has been laid out.

The groups are not asking for those in detention to be prioritized in the vaccination line -- only that they get vaccinated. And they cited a recent policy adoption by the American Medical Association that supports improved health measures of prioritizing vaccine access to vulnerable individuals in immigrant detention.

Newsom's office sent an email on Tuesday, saying the governor's staff is looking into the matter.

Five of the six facilities used to hold immigrants in California are private for-profit facilities, which continue to operate below the appropriate health and safety standards, according to the immigrant rights advocates. Two private prison companies operating most of the detention facilities in California — the GEO Group and CoreCivic — declined to answer whether any detainees in their custody had received the vaccine. Yazdan Panah said that California has an even stronger responsibility to oversee -- and administer vaccines in -- these facilities because they are privately run.

Immigration detention centers, like other congregate settings such as prisons and nursing homes, pose a greater risk of COVID-19 infection, studies show.

One such study estimates the mean case rate among ICE detainees was about 13 times higher than for the U.S. population overall during the first six months of the pandemic.