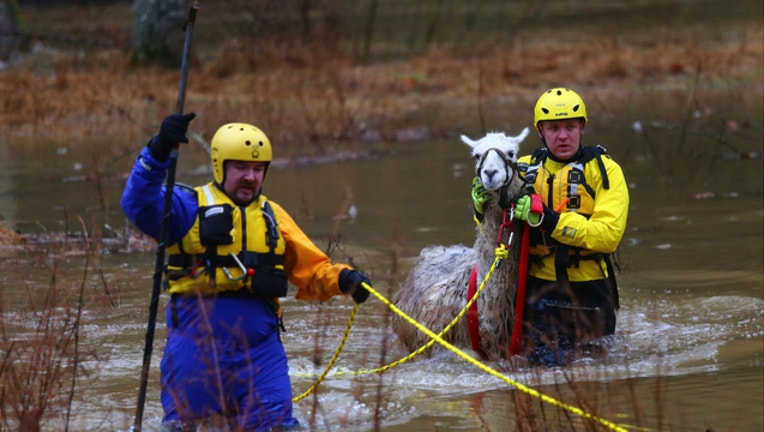 WOODBINE, Md. (FOX 5 DC) - Rain came in heavy throughout the area over the weekend, as DC hit the record for the wettest year in recorded history. Cars were washed off the roads, and even a llama had to be rescued by area crews from the water.

Howard County fire and EMS said Sunday afternoon that after a night of rescuing drivers from their cars, crews assisted in rescuing the llama, which became stranded after a pasture by the Patuxent River in Mink Hollow became flooded.

Crews said the llama was brought of of the water and safely returned to its owner.

Howard County police announced several roads closed due to flooding Sunday. County officials say there was two to three inches of rain for the district on Saturday, with more on Sunday.

In DC, Billy Goat trail A was closed and Great Falls Overlook Trail may be closed as well due to flooding.

Prince William County in Virginia received over 4 inches of rain on Sunday. Officials said numerous roads are impassable and may be closed into Monday.

The National Weather Service says Coastal Flood Warning has been issued for shoreline in DC from 11 p.m. Sunday through 1 p.m. Tuesday.