BOSTON - A 45-year-old man who suffered from a severe autoimmune disorder had an active coronavirus infection that lasted for five months, and the virus mutated several times inside his body before he ultimately passed away.

The case has drawn attention from researchers about COVID-19 in immunocompromised individuals, and the potential role similar scenarios could have played in emerging coronavirus variants.

Last spring, the man went to Brigham and Women's Hospital in Boston for treatment of COVID-19. The case was highlighted in a paper published in the New England Journal of Medicine, which described his battle with the virus for 154 days. He was readmitted to the hospital several times over the five-month period for the recurrence of his infection. He was treated with multiple courses of antiviral medication remdesivir and once with Regeneron’s experimental antibody drug.

Some people with COVID-19 have continued to suffer from persistent symptoms for weeks or even months after the virus has cleared their body, often called "long haulers." But that’s not what happened here.

"The patient that we studied had detectable, high levels of virus for five months," said Dr. Jonathan Li, an infectious disease physician at Harvard Medical School. Li runs a virology laboratory and studied the man’s case.

"This was a highly unusual situation," he added. 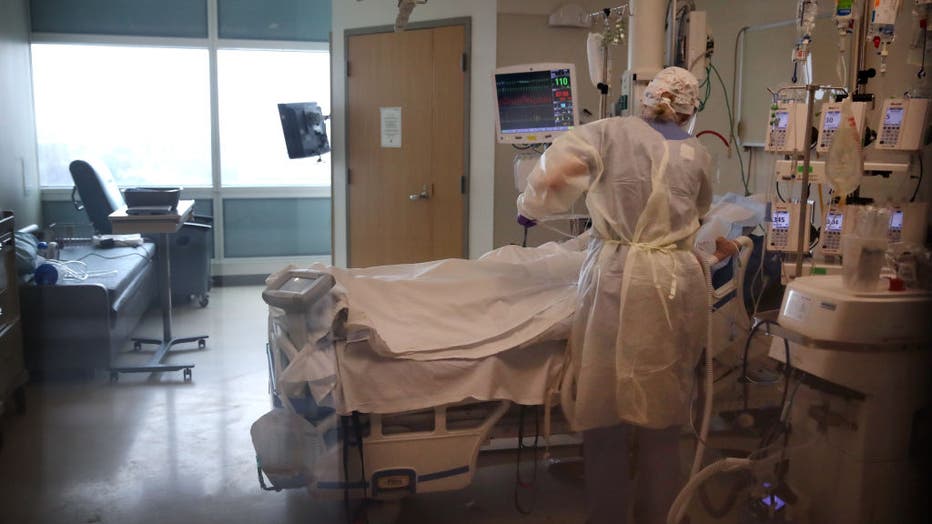 FILE - A nurse cares for a patient in the Special Pathogens Unit ICU at Brigham and Women's Hospital in Boston, Massachusetts on April 27, 2020. (Photo by Craig F. Walker/The Boston Globe via Getty Images)

The clinical team at Brigham and Women's Hospital, the teaching hospital of Harvard Medical School, contacted Li during the man's second admission to the hospital for COVID-19. They wanted to figure out if the patient had become infected with a new strain of virus — or if he, in fact, couldn’t clear the existing virus.

Over the course of a few months, Li and his colleagues obtained samples from the patient and sequenced the virus. They were able to determine that the same strain had been evolving over time, acquiring a cluster of new mutations at an alarming speed.

One key mutation they found, known as N501Y, helps the virus bind more tightly to cells. It’s also shared by all three coronavirus variants (B.1.1.7, B.1.351. and P.1) now causing huge surges of COVID-19 cases in several countries.

The man had suffered from antiphospholipid syndrome, an autoimmune disorder that caused his immune system to mistakenly attack normal proteins in the blood that prevent clotting. The disorder required him to take drugs to suppress his immune system. His condition was also complicated by something called diffuse alveolar hemorrhage, in which blood vessels bleed into the lungs.

The patient did make some antibodies, but the level was relatively low.

"We think that this situation, where his immune system was weakened but still able to mount some response, allowed the virus to pretty much live in an environment where it had to change in order to survive," Li said.

Since the man’s immune system wasn’t strong enough to completely eradicate the virus, it essentially forced the virus to mutate and change, Li said.

Li and his colleagues published the paper about the patient’s case in November. Reports from scientists in the U.K. and South Africa about new variants that had emerged around the world, and discussions of their origins, reminded Li of their experiences with this particular patient.

There have been increasing reports of similar persistent COVID-19 cases in immunocompromised individuals, though these cases remain rare.

While the origins of new coronavirus variants remain unknown, a leading theory is that perhaps the virus could have used scenarios similar to that of the Boston patient to mutate and figure out how best to survive and thrive.

"We don’t know exactly where some of these new variants came from. But I think it’s one of the leading hypothesis that it’s a patient like this gentleman that I helped study — that it’s this kind of immunosuppressed situation that could have led to some of these emerging variants," Li said.

He added that the Boston case highlights the need to pay extra-close attention to immunocompromised COVID-19 patients after their initial infection, and possibly for a longer period of time.

Researchers say the best way to prevent the emergence of more transmissible strains of the virus is to accelerate vaccinations around the world, continue public health measures such as masking and social distancing, and ramp up the country’s ability to sequence and detect new variants to stay ahead of the threat.