A good Samaritan who was shot during a robbery at the Sunvalley mall in Concord died last week.

Family members identified the victim as 32-year-old Calvin Crosby, a U.S. Army veteran and father of two daughters. They say Crosby was working in the mall on New Year’s Eve and was trying to help his cousin who was being robbed when he was shot.

Family members set up a GoFundMe page, to raise money for a college fund for Crosby’s daughters, ages 8 and 12.

"On December 31, 2021, New Year’s Eve, Calvin Crosby was working at the store that he and his younger cousin opened up together at Sunvalley Mall in Concord, CA," the fundraising page says. "Later that afternoon, his cousin was approached by two individuals who fought to rob him. Calvin barring witness to this, jumped in to help and was met with two shots to the abdominal and chest areas."

Concord police are investigating a shooting at Sunvalley Shopping Center Friday. The mall is on lockdown and there is a heavy police presence.

Crosby was rushed to the hospital and died from his injuries almost a month later on January 26th.

Concord police arrested a teenage gunman. They are still searching for a second suspect.

"We all feel a huge loss and sense of emptiness with this senseless gun violence tragedy," the family said on GoFundMe. "Calvin was an amazing human who was always so selfless, courageous, loving, compassionate, funny, creative, and was able to look on the brighter side of things even when he wasn’t dealt the best hand in life." 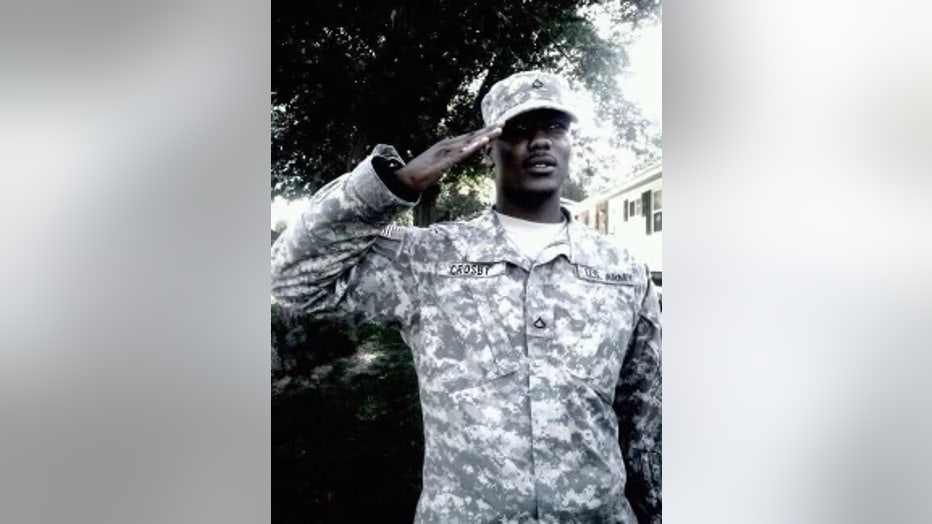 Calvin Crosby, 32, an Army veteran, was shot while trying to help a victim of a robbery in the Sunvalley mall in Concord. He died weeks later on Jan. 26, 2022 from his injuries.