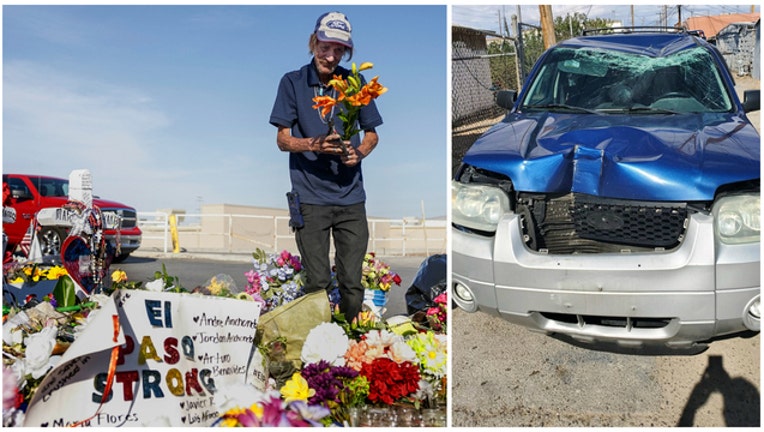 Antonio Basco's wife, Margie Reckard, was shot and killed in a racist attack at a Walmart in El Paso. In the wake of the funeral, someone stole his wife's car and trashed it. (Left image: Getty. Right image: Vanessa Kondow)

EL PASO, Texas (Fox 32 News) - Antonio Basco's wife was murdered in a racist attack at a Walmart in El Paso, Texas. Her funeral was on Friday, attended by thousands of strangers. Then, someone stole his wife's car and trashed it.

That's the story being shared on Facebook by Vanessa Kondow, who works at Kings Towing in El Paso. She says her husband towed the car back to Basco's house. The photo shows the vehicle's front end and windshield smashed.

"WTF is wrong with people!? He just buried his wife yesterday and now this s---," Kondow wrote. "He told my husband that whoever took it also stole a pressure washing machine from a small trailer he used to use for mobile car washing. Share the s--- out of this post to find the m------ who would do this."

Many people on Facebook offered to help Basco get a new car. Kondow said that is not what he wants.

"The Ford Escape was his wife's and he's always wanted to keep it. He has a vehicle of his own. If anyone wants to help, he most likely just wants the Escape to be repaired so he has that memory of his wife, Margie," Kondow wrote.

Margie Reckard was one of 22 people shot and killed at the Walmart on August 3. The killer wrote online that he wanted to stop the "Hispanic invasion of Texas."