SONOMA COUNTY, Calif. - The Sonoma County Sheriff has ordered mandatory evacuations for Zones 6, 8 and 10 including the city of Santa Rosa, as the Kincade fire grew to 30,000 acres and only 10 percent contained Sunday morning.

The most recent map is below and can also be accessed here:

A mandatory evacuation ordered at 4:40 a.m. Sunday greatly expands the area impacted by the Kincade Fire burining in Sonoma County. The new evacuation orders have been placed for the following:

See the updated map below. 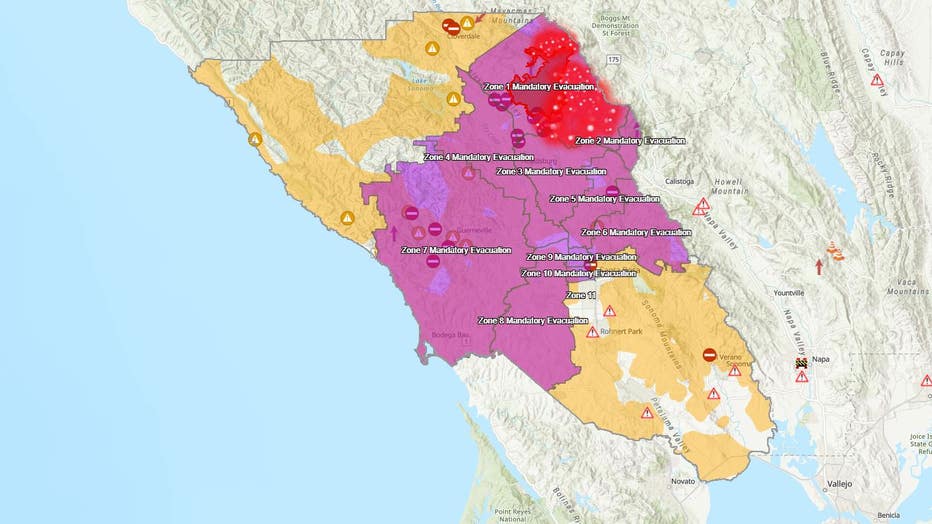 Map shows the latest areas under evacuation from the Kincade Fire as of 6:30 a.m. Sunday October 27 (Sonoma County)

Hwy 101 northbound at Hopper Ave was closed in northern Santa Rosa and SB 101 at Cloverdale Blvd South in Cloverdale for several hours Sunday morning. The CHP was in the process of re-opening the higway at around 7:15 a.m.

The City of Petaluma said Sunday morning that it has reached capacity at all of its evacuation centers. Petaluma is not accepting any more people at its evacuation
centers.

The historic Soda Rock Winery in Alexander Valley was engulfed in flames Sunday morning. The winery, located 4.3 miles north of Healdsburg, was established in 1869. Well known in the area, the winery has hosted countless weddings and special events.

The National Weather Service was reporting gusts of up to 93 miles per hour in the Healdsburg hills Sunday morning.

Authorities have ordered at least 90,000 residents to evacuate towns near the massive Kincade wildfire Saturday, and the state's largest utility announced power shut-offs for an estimated 2.35 million people have begun due to forecasts of severe winds and extreme fire danger.

Saturday morning, the entire communities of Healdsburg and Windsor were ordered to evacuate ahead of strong winds that could lead to erratic fire behavior near the blaze burning in wine country. By Saturday evening, officials had expanded that mandatory evacuation zone to include all land west of the existing evacuations to the Pacific Ocean.

Earlier Saturday, an official with the Sonoma County Sheriff's Office said it would be the biggest evacuation in the county in more than 26 years. There's no word yet on if the expanded evacuation order would be historic for the history of the State.

"The winds are expected anywhere between 8 p.m. and midnight and from all reports they're expected to be extremely strong," said Brian Vitorelo with the California Department of Forestry and Fire Protection.

"We are evacuating because this fire is very dangerous and it's expected to move toward Windsor and Healdsburg this evening," Sonoma County Sheriff Mark Essick said during a press conference Saturday morning.

Some gusts this weekend could reach 80 mph or higher as part of this historic wind event, the National Weather Service warned early Saturday.

As thousands of people evacuate Sonoma County, SkyFOX was over the Kincade Fire ahead of the forecasted major wind event.

Patients at Sutter Santa Rosa Regional Hospital were evacuated Saturday night. A spokesperson for the facility said in a statement,"Our first priority is the safety of our patients, employees and clinicians. We are evacuating patients from Sutter Santa Rosa Regional Hospital. Our facilities at Novato and California Pacific Medical Center will receive the evacuated patients.” 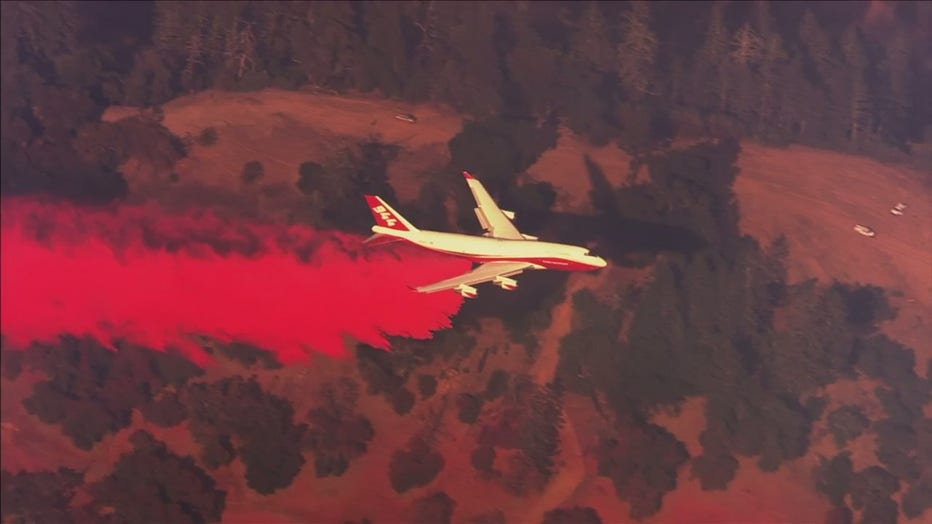 Authorities said this decision was made for several reasons, including out of an abundance of caution, as well as what happened Friday.

Firefighters raced to make progress against the wildfire burning near Geyserville in Sonoma County before ferocious "diablo winds" returned.

The Kincade fire had burned 49 buildings, including 21 homes, and swept through nearly 40 square miles of the wine-growing region. It was 10% contained by Saturday morning.

Cal Fire announced that a firefighter came across two residents about 6:20 p.m. Friday, as they were trying to evacuate.

When heat from the fire suddenly grew intense, the firefighter deployed the shelter and all three took cover.

The shelter device is designed to reflect radiant heat and trap breathable air. The two residents and the firefighter were able to get inside and shelter until the danger passed, Cal Fire officials said Saturday morning.

Both residents and the firefighters emerged with minor injuries and were treated at a hospital.

Several thousand people living in small communities in neighboring Lake County were warned to be ready to evacuate if an order is given. The area was the scene of a 2015 wildfire that killed four people and burned nearly 2,000 homes and other buildings.

No cause has been determined for any of the current fires, but PG&E said a 230,000-volt transmission line near Geyserville had malfunctioned minutes before that fire erupted Wednesday night.

The utility acknowledged that the discovery of the tower malfunction had prompted a change in its strategy.

"We have revisited and adjusted some of our standards and protocols in determining when we will de-energize high-voltage transmission lines," Andrew Vesey, CEO of Pacific Gas & Electric Co., said at a briefing Friday.

Buses will be available to transport people out of the evacuation zone. Buses could be school buses, city of Santa Rosa buses, or transit vehicles. Highway 101 is the route for people to drive and leave the area. Evacuation centers are now open at the Santa Rosa Veterans Hall, the Sonoma County Fairgrounds across from the hall, as well as the Petaluma Veterans Hall.

So far, 77 structures have been destroyed (31 of those are homes). Officials announced Saturday morning that the fire is threatening more than 20,000 structures. By Saturday evening, that number had not changed.