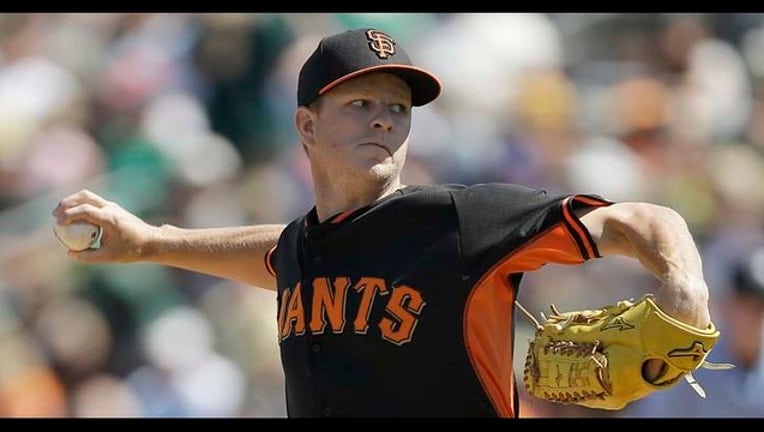 That was the team's biggest issue following a 7-6 loss to the Arizona Diamondbacks on Tuesday night.

All-Star pitcher Matt Cain was placed on the 15-day disabled list with a right forearm injury before the game and won't start as scheduled on Wednesday. Jake Peavy has a back problem that flared up during his bullpen session and could affect his ability to make his scheduled start on Sunday. And first baseman Brandon Belt strained his groin going after a foul ball in the fourth inning and had to leave the game.

"It's unfortunate for Matty," Giants manager Bruce Bochy said of Cain, whose spot in the rotation was taken by rookie call-up Chris Heston. "He's worked hard to get back on the mound and he's had a little hiccup there, but hopefully it won't be too long. It's hard to say. Two, three weeks, we're hoping."

Backup first baseman Travis Ishikawa has a lower back strain and is already on the 15-day DL. So is outfielder Hunter Pence, with a broken left forearm.

Peavy is in line to start Sunday at San Diego if he's cleared by the medical staff, but after saying he felt sore following his bullpen session, a decision on his status could come Wednesday.

"I hope that decision is for me to get the ball in the next few days. I'm as optimistic as I can be," Peavy said.

Belt will have an MRI on Wednesday, Bochy said. After the game, Belt said he could lift his leg and jog, but felt pain going from side to side.

Bochy said he's never gone through such bad luck with injuries to begin a season.

"It's something that's difficult to do with three players," he said. "You have one first baseman on the DL. Hopefully Belt's fine. So we're going through a rash of them right now. Some things you can't explain."

Cain has a flexor tendon strain in his right forearm, the Giants said. The 30-year-old right-hander was put on the DL retroactive to April 4. He will return to San Francisco for further evaluation.

The team said an MRI revealed Cain does not have ligament damage in his forearm.

A three-time All-Star, Cain did not pitch after July 9 last season and had surgery Aug. 12 to remove bone chips. He had a 5.40 ERA in four spring training starts, allowing 15 hits in 11 2-3 innings with seven strikeouts and three walks.

Jake Lamb and David Peralta each hit a three-run homer to power the Diamondbacks. Lamb finished with four RBIs, giving him a club-record seven in Arizona's first two games. He's already within four RBIs of his total in 37 games last season.

"I feel comfortable at the plate right now. I just want to keep it going," Lamb said.

All seven runs were charged to Giants starter Ryan Vogelsong (0-1), who allowed six hits in 4 2-3 innings. He walked four and struck out five.

"He was so close to having a pretty good game. Two three-run homers with two outs. Worked a lot of deep counts. That might have caught up with him," Bochy said.

Buster Posey, who was 3 for 3, and Brandon Crawford homered for the Giants. Posey had a two-run shot in the first inning off starter Rubby De La Rosa (1-0), who allowed six runs and eight hits in 5 1-3 innings.

"It's just hard because basically I wasted a good offensive night from our team," Vogelsong said. "Anytime we can go out and score six runs we should get a win. Those guys deserve a win for that."

Arizona's bullpen tossed 3 2-3 scoreless innings. Addison Reed earned a save with two strikeouts in the ninth.