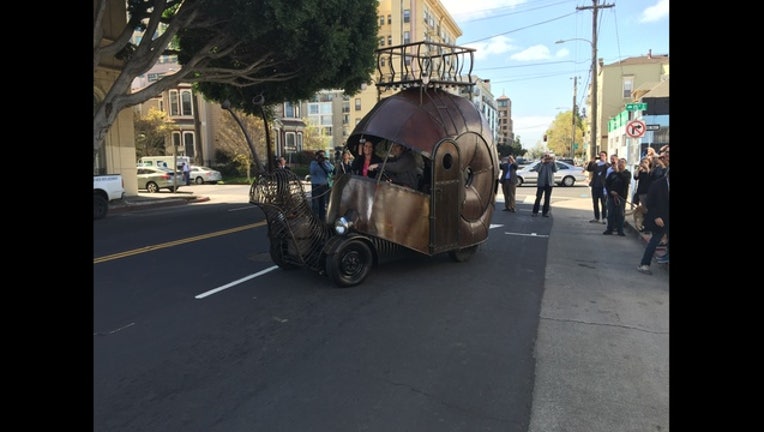 After artists used blow torches to cut a titanium ribbon that had been placed across the store entrance, Schaaf said, "I'm thrilled that Flax is coming to Oakland because we've always been a city of artists and entrepreneurs."

Turning toward store owner Howard Flax, Schaaf said, "This makes you central to the Bay Area and all the energy of the artists here."

The art supply store has been based in San Francisco for 78 years but Flax said it had to move out of its flagship location at Market and Valencia streets because the building is being torn down to make way for a high-rise condominium complex.

Flax said he looked at several possible sites in San Francisco but eventually settled on the 14,500-square-foot building at 1501 Martin Luther King Jr. Way on the outskirts of Oakland's downtown, which formerly housed an automotive repair shop and an indoor soccer facility, because it was the best fit.

Flax said his business, which was founded by his grandfather, still has a presence in San Francisco with a 5,000-square-foot store at Fort Mason Center that just opened last November.

Flax said he was drawn to the Oakland structure, which was built in 1922, because of its architectural features, such as its soaring ceilings and an exposed truss system, and its location in an up-and-coming neighborhood.

"There is drama in the interior space that spoke to us. The Martin Luther King building had more of a wow factor than our old building on Market Street in San Francisco," he said.

Flax added that the new store is now the biggest art supply store in the East Bay.

Brian Kendall, who works on downtown development for the city of Oakland, said, "What is great about this is that it's a couple of blocks off the main drag. It will be a great anchor for this area, which doesn't have a lot of retail."

Schaaf said Flax's move to Oakland "is part of a trend in which many companies are moving to Oakland from all over the Bay Area," citing Uber and Sunset Magazine as other businesses that now have a major presence in the city.

Schaaf said Oakland "is the hot, happening epicenter and is a place people want their brand associated with."