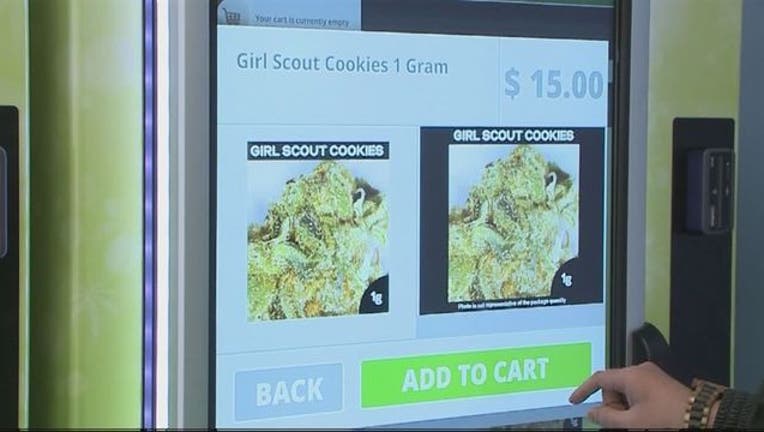 The first purchase from a ZaZZZ, as the user-automated machines are called, was for one gram of a strain dubbed Girl Scout Cookies for $15, inside Seattle Caregivers medical marijuana dispensary.

"It's a way to take something that has proven itself as a viable business model throughout the last century, and bring it into the 21st century," said Stephen Shearin, president of technology company American Green Inc, which provides the machines.

But in Washington state, a loosely regulated medical marijuana industry runs alongside the recreational pot system.

The Seattle vending machine debut comes as lawmakers in Olympia weigh numerous marijuana-related bills, including a wide-ranging proposal to align the medical and recreational industries by phasing out collective gardens and allowing medical dispensaries to transition to recreational-use shops.

Shearin said about five ZaZZZ vending machines are currently planned for Seattle and Washington state, with more slated for Colorado, California, Michigan, Rhode Island and Alaska, all among the 23 states where medical marijuana is legal.

The machines are upgraded versions of the first ZaZZZ machine that opened last April in Colorado's Herbal Elements dispensary, which only carries edibles.

The Seattle machine was stocked with cannabis flower, vaporizer pens, hemp-oil energy drinks and other merchandise, Shearin said, adding that machines would carry unique products not available in the dispensaries where they are located.

A buyer's medical marijuana license is checked by a dispensary employee before that person can use the machine, which uses an ID-card scanner.

At a recreational-use pot shop, such a machine would have to be installed behind the counter and operated by an employee, under Washington state law.

"What is the purpose of having a vending machine if it's got to be manned?" said John Davis, who owns dispensaries in Seattle. "Why not just sell them the product?"