What is monkeypox and what are the symptoms?

Massachusetts reported a case of monkeypox in a man who recently traveled to Canada on May 18, 2022. FOX Medical Team correspondent Dr. Mike Cirigliano discusses the rare virus.

Some U.S. health officials are conceding that monkeypox is probably not going away anytime soon.

The disease’s spread is slowing but the virus is so widespread that elimination is unlikely, the Centers for Disease Control and Prevention said. That conclusion was in a recent CDC report, and echoed Friday by Marc Lipsitch, director of science in the agency's disease-forecasting center.

Lipsitch hesitated to say monkeypox is permanently here to stay, but he said it stands to be a continuing threat for the next few years.

"It's in many geographic locations within the country" as well as in other countries, Lipsitch told The Associated Press. "There's no clear path in our mind to complete elimination domestically."

The virus has mainly spread among gay and bisexual men, though health officials continue to stress that anyone can be infected. It's important that people at risk take steps to prevent spread and that vaccination efforts continue, Lipsitch said.

The CDC report contained some good news: The U.S. outbreak seems to have peaked in early August. The average number of daily cases being reported — fewer than 150 — is about a third what it was reported in the middle of the summer, and officials expect the decline will continue for at least the next several weeks. 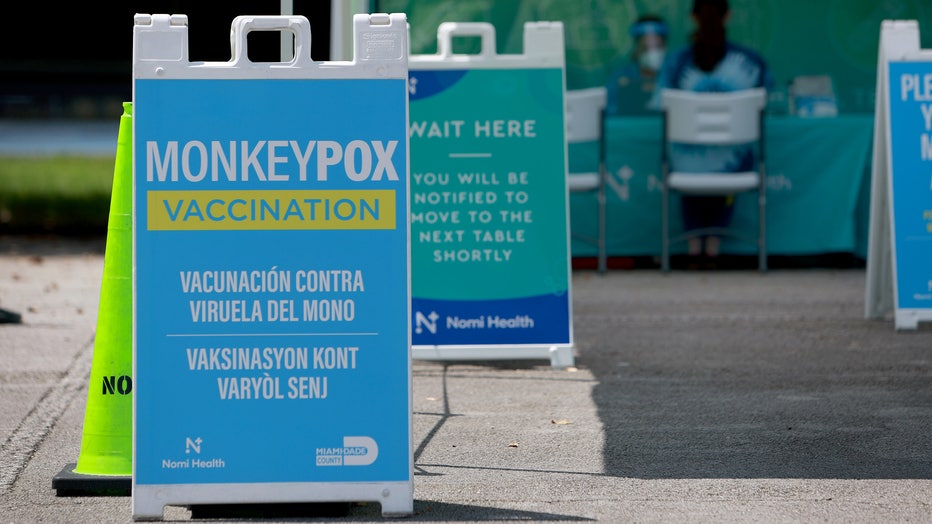 A sign announcing monkeypox vaccination is setup in Tropical Park by Miami-Dade County and Nomi Health on August 15, 2022 in Miami, Florida. (Photo by Joe Raedle/Getty Images)

Lipsitch attributed the good news to increasing vaccinations, cautious behavior by people at risk and infection-derived immunity in the highest risk populations.

Dr. Tom Inglesby, director of the Johns Hopkins Center for Health Security, agreed that it's unlikely that spread of monkeypox will stop in the U.S. anytime soon, but he said it's still possible in the long term.

If domestic transmission were stopped, infections may still continue if people catch the virus while traveling internationally, he said. But the declining cases makes it seem like "we’ve turned a real corner."

"The efforts underway are succeeding, and should be continued, if not intensified," he said.

With case numbers going down, this is a good time for local health departments to take a new stab at doing intensive contact tracing to try to stop chains of transmission, he said.

Monkeypox is endemic in parts of Africa, where people have been infected through bites from rodents or small animals, but it wasn’t considered a disease that spreads easily among people until May, when infections emerged in Europe and the U.S.

There have been more than 67,000 cases reported in countries that have not historically seen monkeypox. The U.S. has the most infections of any country — more than 25,600. One U.S. death has been attributed to monkeypox.

Camille Seaton was one of the first confirmed cases of Monkeypox in Georgia. She spoke with LiveNOW from FOX’s Josh Breslow about her experience battling the virus.

More than 97% of U.S. cases are men. The vast majority have been men who reported recent sexual contact with other men.

Though cases have been declining, the proportion of new cases that have information about recent sexual contact is also down, officials said. That's causing a growing blind spot about how the virus may be spreading, Lipsitch noted.