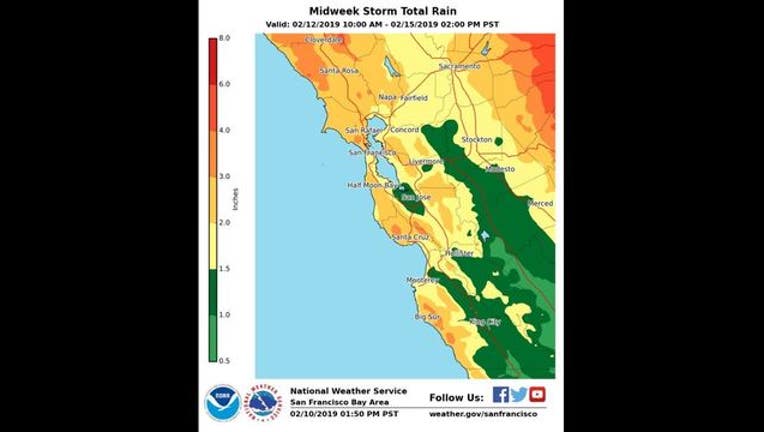 A forecast by the National Weather Service for the rain that's expected mid-week.

OAKLAND, Calif. (KTVU) - Another wet storm is expected to impact the Bay Area and Northern California by Tuesday night, according to the National Weather Service.

The storm, which is expected to hit the region starting Tuesday night and continuing into Wednesday, is expected to drop at least an inch of rain in the Bay Area and between 4-6 inches in the coastal mountain ranges, meteorologists said. The North Bay hills are expected to get 2-3 inches or rain, the South Bay 1-1.5 inch and the Monterey Bay area 1-2 inches.

According to the weather service, the heaviest rains may dump 1/3-inch of rain in the coastal hills, and the storm will head from north to south. The rain will taper to showers on Wednesday.

Meteorologists said the rain might lead to pooling of water on roadways and flooding of small streams and creeks in the most impacted areas.

In addition, gusty winds are expected to hit as the storm leaves the area on Wednesday. Gusts are expected to hit 20-30 mph during breezy conditions, with the strongest winds projected to reach 40-50 mph in the coastal areas, the East Bay hiills and Santa Cruz Mountains.