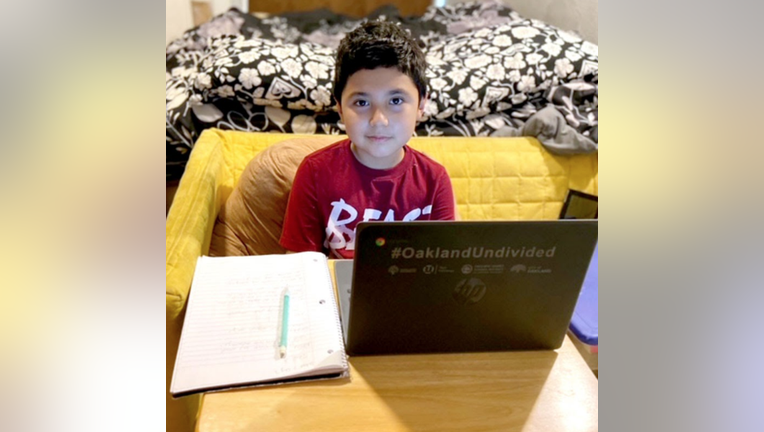 Eric Yanez, a 4th grader in Oakland, got a free Chromebook from OUSD. Photo: OUSD

OAKLAND, Calif. - Oakland Unified School District announced they soon hope to reach the halfway mark in handing out free computers to any student who doesn't have a Chromebook, more than two months into distance learning because of the coronavirus pandemic.

In a news release on Wednesday, the district said the plan is to give out the 12,500th computer of the original 25,000 units, purchased in large part with $10 million from Twitter CEO Jack Dorsey in the spring.

On Thursday, the district will host a computer giveaway with Oakland Mayor Libby School and school board trustee James Harris at Castlemont High School. District spokesman John Sasaki said the hope is to get the rest of the computers into the hands of every student in need, although he wasn't specific about when that would be.

Privacy vs. community: Should schools require students to turn on cameras?

In a separate email to KTVU, Sasaki said that while all the laptops have arrived, they have not all been handed out because of smoky skies and poor air quality stemming from the California wildfires.

Mayra Alvarado, a 5th-grade Spanish teacher at Manzanita Elementary School in Oakland, told KTVU in an earlier interview, that the tech gap is still a problem for her students. She estimated 30% of her students still don't have the proper equipment or connectivity for class.

"Some don't have anything. Some call in through the phone. Some just picked some up at our supply distribution the other day," she said. 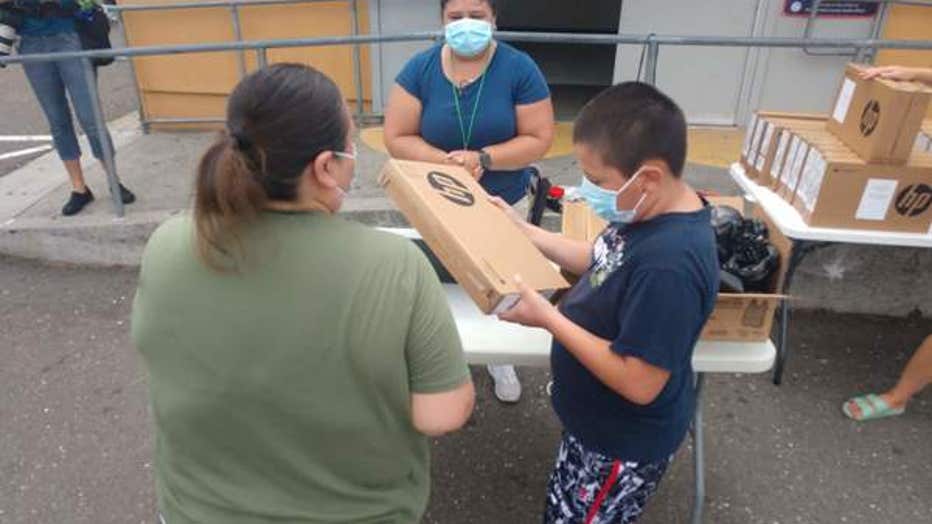 Eric Yanez, a 4th-grader at Hoover Elementary School, is one of the students who recently got a Chromebook through the district.

His mother, Guadalupe Canchola, said distance learning was very hard without it.

"Initially, he would use my phone for the Zoom class and a borrowed tablet for the actual school work and it was just so different and a little frustrating a lot of the time," she said in a statement.

Until they receive a new Chromebook, Oakland students in district-run and charter schools still have one of the more than 23,000 computers and 7,000 hotspots that were loaned out by schools since the shelter-in-place took effect last March, the district said.

IF YOU'RE INTERESTED: If you are a family in Oakland public schools, make sure to fill out the Tech Check survey to receive your device to ensure your student has access to a computer and the internet. If you know of a student or family in need who does not currently have access to technology resources, including a computer to participate in remote learning, please complete the OUSD Technology Intake Form.  If families are having any issues with devices, they can contact Tech Exchange for support by texting or calling 510-866-2260.